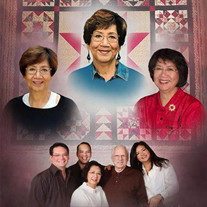 Melba Novina (Valentin) Cole, passed away Saturday morning, February 2, 2019, surrounded by loving family at IU North Hospital in Carmel, Indiana. Melba was born in San Francisco, CA on December 30, 1935 to Raymondo Valentin and Julia (Ulanimo) Valentin. She was raised in a close Filipino family with 5 brother and sisters. Melba finished high school and continued her education at Stockton Jr. College and American River Jr. College in Sacramento, CA. Later taking jobs at Pacific Telephone and Aerojet General Corporation. It was during this time that she met and married an Air Force Officer and Indiana native, Peter Wayne Cole. The couple moved to Wells Co. and began building a life and family together. Their children include; Elizabeth (Robert) Koehne, Matthew Wayne (Jessica) Cole and Christopher Allen (Lora) Cole, all of Indianapolis along with 8 grandchildren; Cameron Koehne, Kyle (Sydney) Koehne, Madeline Cole, Griffin Cole, Adam Turvey, Clayton Cole, Coen Cole and Allie Cole. While building her family, she was also building her community. Melba was an avid volunteer, from Girl Scout Troop leader, Girl Scout Counsel Board member, Vacation Bible School organizer, Caylor Nickel Clinic, Creative Arts Council, and the Wells Co. Mental Health Association, and a longtime member of the Wells County Republican Party. Some of her most rewarding times were spent with the Wells County Republicans. She had a desire and standing dedication to further her community with her service, a trait she shared with Pete. Countless hours and energy went into Committee memberships and lifelong friendships formed here. She was a member of Wells Co. Republican Women’s Club, Liberty Township Advisory Board, Delegate to the Republican State Convention, Secretary of the Republican Central Committee, among other appointments. Most recently, Melba was re-elected and sworn in as Liberty Township Advisory on December 27, 2018. Melba’s profession of faith and participation at Warren Church of Christ, especially in the last 6 years, brought her even more friendships, volunteer opportunities and endless comfort. Her enthusiasm…her encouraging spirit…her fierce loyalty… her leadership…her contagious smile and her “up for anything” attitude to EVERYTHING Melba did will be why she is remembered and irreplaceable in our hearts. In addition to her children and grandchildren, Melba is survived by siblings: Joan Gallagher of Stockton, CA, Peter Valentin of L.A. and Linda Andersen of Turlock, CA. Melba is preceded in death by her parents, husband Pete in 2012 and two brothers, McArthur and Raymond Valentin. A service to celebrate Melba’s life will be held at 1 P.M. on Friday (Feb. 8, 2019) at the Thoma/Rich, Lemler Funeral Home in Bluffton. Pastor Ethan Stivers will officiate. Entombment will take place in the Cole Family Mausoleum at Fairview Cemetery. Calling hours will be held from 4 to 8 P.M. on Thursday at the funeral home and for one hour prior to the service on Friday. In lieu of flowers, the family prefers memorials be made in Melba’s memory to the Wells County Foundation. Funeral arrangements have been entrusted to the care of the Thoma/Rich, Lemler Funeral Home in Bluffton. Friends can send online condolences to the family at www.thomarich.com.

The family of Melba N. Cole created this Life Tributes page to make it easy to share your memories.

Send flowers to the Cole family.