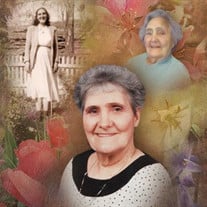 Maymie “Geneva” (Ball) Prater, 86, of Bluffton passed away on Friday morning, March 29, 2019, at Christian Care Retirement Community in Bluffton. She was born on November 14, 1932 in West Liberty, Kentucky to Quincy & Mary (Keaten) Ball. She worked in the housekeep department of Caylor-Nickel Clinic for many years and was a homemaker and spent her free time dedicated to her family and grandchildren. On September 7, 1949 in West Liberty, Kentucky she married Stanley Prater and he preceded her in death on July 16, 1987. In 1999, she married Richard Kiser and he preceded her in death in 2011. Maymie is survived by her children; Stanley (Dee) Prater, Jr., Roger (Melanie) Prater, Harold (Balina) Prater, Bruce (Favor) Prater and Randall Prater, all of Bluffton along with 15 grandchildren and 22 great-grandchildren and several great-great-grandchildren. She is also survived by siblings; Ray Ball of Butler, Wayne Ball of Bluffton, Dorothy Costollo of Fort Wayne. Maymie is preceded in death by her parents, husbands and a daughter; Betty Jo Prater and siblings; Logan Ball, Gail Dyer, Anna Springer, Flora Wright and Freda Springer and Jesse P. Ball. Calling hours will be held from 9 to 12 Noon on Tuesday (April 2, 2019) at the Thoma/Rich, Lemler Funeral Home in Bluffton. Calling Hours will be held from 9 to 12 Noon on Thursday (April 4, 2019) at the Potter Funeral Home in West Liberty, Kentucky. A graveside service will take place at 1 P.M. on Thursday (April 4, 2019) at the White Oak Cemetery in White Oak, Kentucky. Memorials made me made to the Golden Apple Unit of Christian Care Retirement Community. Funeral arrangements have been entrusted to the care of the Thoma/Rich, Lemler Funeral Home in Bluffton. Friends can send online condolences to the family at www.thomarich.com.

The family of Maymie "Geneva" Prater created this Life Tributes page to make it easy to share your memories.

Send flowers to the Prater family.