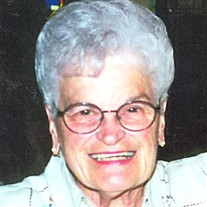 Another “Angel” gets her wings. Maxine Moser, 94, peacefully received her “wings” at River Terrace Estates in Bluffton on Tuesday, September 08, 2015. She was born on May 26, 1921 to John and Hazel (McCleery) McAfee in Wells County, Indiana. She married Richard (Dick) Moser on September 2, 1940. Maxine was preceded in death by her beloved husband Richard of 55 years and her siblings: John, Donald, Robert, Frederick, Harry and Miss Elizabeth McAfee, along with her mother and father. Surviving is her sister Mrs. Gladys Cotton of Warren, Indiana and her brother Jack (Marlene) of Coldwater, Michigan. Maxine dearly loved her family and was loved by her nieces and nephews. Her passing will leave a hole in many lives. Her beautiful smile will be missed by all who knew and loved her. Rejoice with her family in the fact that she lived her Christian life to its fullest, doing good for others. Maxine retired in 1982 from CTS in Berne where she was employed as a secretary and receptionist for over 15 years. For over 55 years, she was a member of the Eastern Star, serving as Grand Matron of Indiana for the term of 1967-1968. For over 40 years, she was also a member of the Daughters of the Nile in Fort Wayne, Indiana. A memorial and Celebration of her life will be held at 10 a.m. on Saturday (September 12, 2015) at the Thoma/Rich, Lemler Funeral Home in Bluffton. Her pastor of Calvary Bible Church of Berne, where she faithfully attended, will officiate. A private family burial will take place in the MRE Cemetery just west of Berne. In lieu of flowers, donations in her name should be made to her home church for Calvary Bible Church Building Fund. Maxine’s funeral arrangements have been entrusted to the care of the Thoma/Rich, Lemler Funeral Home in Bluffton. Friends can share memories and send online condolences to the family at www.thomarich.com.

The family of Maxine Moser created this Life Tributes page to make it easy to share your memories.

Another “Angel” gets her wings. Maxine Moser, 94, peacefully...