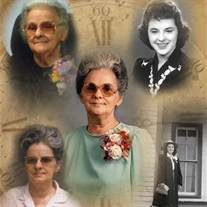 Mary Jane Harnish-McKnight, 97 of Bluffton passed away on Thursday morning, January 30, 2020, at Signature Healthcare of Bluffton. She was born on December 3, 1922 in Cook County, IL. to John & Mary Lucille (Stewart) Patty. A graduate of Union Center School, Mary Jane worked General Electric in Fort Wayne and owned & operator of the Coffee Pot Restaurant in Bluffton, with her husband Paul. She had a love for helping others and would often babysit or care for others who were sick. She was a member of the Bible Holiness Church in Bluffton where she played the piano and now called Christian New Light Church. Mary Jane was a devoted Christian and loved the Lord. It was her desire for her family and others to know Him and walk in His ways. In January of 1944, Mary Jane married Paul R. Harnish in Bluffton and he preceded her in death in 1972. On December 24, 2000, Mary Jane married Rev. Charles F. McKnight and he preceded her in death in 2010. Survivors include her children; Penny (Chet) Bercot of Decatur, Pam (Dave) Nixon Bluffton along with 7 grandchildren and 14 great-grandchildren and 8 great-great-grandchildren. She is also survived by a sister, Velma Jean Johnson of Berne. Mary Jane is preceded in death by her parents, husbands, a son Paul Raymond Harnish, II., and a daughter, Patty L Harnish, a grandson, Paul Raymond Harnish, III. along with siblings; Wilma Hall, Joan Schwartz and John Patty. Funeral services will be held at 10:30 on Monday (Feb. 3rd) at the Thoma/Rich, Lemler Funeral Home in Bluffton with Mary Jane’s stepson, Pastor Tim McKnight officiating. Burial will follow at Elm Grove Cemetery in Bluffton. Calling Hours will be held from 2 P.M. to 6 P.M. on Sunday (Feb 2nd.) at the funeral home and for one hour prior to the service on Monday. Memorials may be made to Wells County Camp of Gideons International. Funeral arrangements have been entrusted to the care of the Thoma/Rich, Lemler Funeral Home in Bluffton. Friends can send online condolences to the family at www.thomarich.com.

Mary Jane Harnish-McKnight, 97 of Bluffton passed away on Thursday morning, January 30, 2020, at Signature Healthcare of Bluffton. She was born on December 3, 1922 in Cook County, IL. to John & Mary Lucille (Stewart) Patty. A graduate of Union... View Obituary & Service Information

The family of Mary Jane Harnish - McKnight created this Life Tributes page to make it easy to share your memories.

Mary Jane Harnish-McKnight, 97 of Bluffton passed away on Thursday...