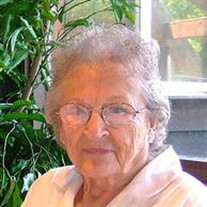 Mary Louise Green, 98, of Fishers, and a former Bluffton resident, passed away at Castleton Health Care in Indianapolis on Friday, May 27, 2016 at 7:35 PM.. Mary was born in Rockford, Illinois to Zella and William H. Hart on February 26. 1918. On April 25, 1942 in Bluffton, Mary was married to Robert Green Jr. Bob passed away May 26, 2014. Mary had earned her Bachelor’s Degree from Miliken University in Decatur, IL and went on to earn her Master’s Degree in Elementary Education from Ball State University in Muncie. Mary had taught in several Wells County Schools completing her teaching career at East Side Elementary School in 1976. Mary was a Worthy Matron of Crescent Chapter #49 East Star in 1976. Mary enjoyed many years of traveling throughout the United States, Canada and Mexico. In 1980, Bob and Mary moved to Palm Springs, CA where she assisted him in his golf club making business. While there, Mary was a docent at the Desert Museum and a member of the Palm Springs Women’s club and a member of the Golden West Singers and the Sweet Adeline Chorus. In 1990, Bob and Mary returned to Bluffton. Mary is survived by her children David (wife Carol) Green of Central City, IA; William “Dennis” (wife Kay) Green Of Indianapolis, IN and Teresa (widow of Gordon) Pusser of Santa Cruz, CA., along with eight grandchildren and eight great-grandchildren., and Sister in law Evelyn Gaiser of Fort Walton Beach, FL. Mary was preceded in death by her Parents, Husband and Sisters Marilyn Hart and Helen Stark and Brother Howard Hart. There will be no services at this time. Interment will take place at a later date. Arrangements have been entrusted to the Thoma/Rich, Lemler Funeral Home, 308 West Washington Street, Bluffton IN 4614. Friends may share condolences at www.thomarich.com.

Mary Louise Green, 98, of Fishers, and a former Bluffton resident, passed away at Castleton Health Care in Indianapolis on Friday, May 27, 2016 at 7:35 PM.. Mary was born in Rockford, Illinois to Zella and William H. Hart on February 26. 1918.... View Obituary & Service Information

The family of Mary Louise Green created this Life Tributes page to make it easy to share your memories.

Mary Louise Green, 98, of Fishers, and a former Bluffton resident,...

Send flowers to the Green family.