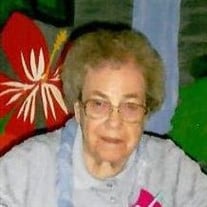 Mary L. Anderson, 87, of Bluffton passed away Thursday morning, November 9, 2017, at Christian Care Retirement Community in Bluffton. Mary was born on September 30, 1930 in Salem, Indiana to Harry & Mabel (Colglazier) Zink. She attended Columbus High School in Columbus, Indiana. She worked at LaVaughn’s Children’s Shop in Columbus. She also worked at Elder-Beerman Department Stores in Columbus and retired from the Marion Store. She was an active member of St. John’s Worship Center in Vera Cruz. Mary is survived by four children: Mike (Chris) Page of Tell City, IN, Russell (Sandy) Page of Connersville, IN, Stewart Page of Columbia, SC, and David (Melissa) Freeman of Chattanooga, TN, along with seven grandchildren: Zack Page, Brett Page, Tami Cook, Josh Page, Jessica Lucas, Kayla Adams, Aaron Freeman, and 10 great-grandchildren, along with a brother Bill (Della) Zink of Jacksonville, FL. She is preceded in death by her parents and siblings: Gerald (Lavaughn) Zink, Richard (Jane) Zink and Judy (Verlin) Kauffman. A service to celebrate Mary’s life will be held at 1 P.M. on Saturday (November 11th) at the Thoma/Rich, Lemler Funeral Home. Rev. Don Rentschler will officiate. Calling hours will be held from 11 AM to 1 PM on Saturday, prior to the service. Memorials may be made in Mary’s memory to Christian Care Resident Activity Fund. Funeral arrangements have been entrusted to the care of the Thoma/Rich, Lemler Funeral Home in Bluffton. Friends can send online condolences to the family at www.thomarich.com.

The family of Mary L. Anderson created this Life Tributes page to make it easy to share your memories.

Send flowers to the Anderson family.