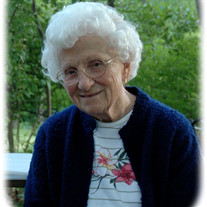 Mary Alice Jackson, 99, a longtime Bluffton resident, passed away on Friday, March 2, 2018, at her home. Born May 10, 1918 to Wilbert A and Hazel (Mickley) Krieg, she married James S. Jackson on December 2, 1939, in Daleville, Indiana. Mary Alice and Jim celebrated 67 years of marriage before his death in 2006. Surviving are their children: James D. (Celia) Jackson of Syracuse, Indiana, Thomas K. (Priscilla) Jackson of Syracuse, Indiana, Sally (Norm) Kain, Mick (Brenda) Jackson and Cindy Lambert, all of Bluffton, 23 grandchildren and 24 great-grandchildren. Also surviving are her brothers, Keith Krieg and Paul (Joan) Krieg of Fort Wayne. Mrs. Jackson was preceded in death by brothers, Richard Krieg, Wilbert (Bill) Krieg, Jr., and James Krieg, and an infant granddaughter. Mary Alice was a 1936 graduate of Huntington High School. In 1947, Mary Alice and Jim started the James S. Jackson Construction Company where she was active for 25 years. She shared her love of knitting and nature with her children, grandchildren and great-grandchildren, fed an army of guests with almost no warning, and organized many family reunions. Mrs. Jackson was a member of the First Reformed Church, Psi Iota Xi, Eastern Star, Home Forum Club, and Study Club. Calling hours will be held from 2 – 8 p.m. Friday at Thoma/Rich, Lemler Funeral Home in Bluffton. A celebration of life service will take place on at 10:30 a.m. on Saturday (March 10, 2018) at the First Reformed Church, with calling for one hour prior to the service at the church. Burial will be at Six Mile Cemetery. The family requests in lieu of flowers, memorials are to Family LifeCare of Northeast Indiana, Caylor-Nickel Foundation Family YMCA, or the Wells Community Boys and Girls Club. Funeral arrangements have been entrusted to the care of the Thoma/Rich, Lemler Funeral Home in Bluffton. Friends can send online condolences to the family at www.thomarich.

The family of Mary Alice Jackson created this Life Tributes page to make it easy to share your memories.

Send flowers to the Jackson family.