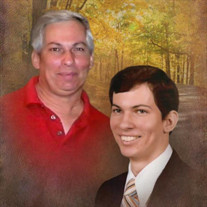 Mark A. Cowgill, 60 of Bluffton, passed away Monday morning, November 22, 2021 at Byron Health Center in Fort Wayne. Mark was born on October 10, 1961 in Portland, Indiana to Phillip A. & Joyce I. (Penrod) Cowgill. He graduated from Bluffton High School with the class of 1980. He attended Marion College for 3½ years. Mark worked for Chevrolet in Illinois. He worked for a bus company where he transported handicapped students and drove a city bus in Chicago. He also worked for Hartson-Kennedy Countertop Company in Marion, Indiana. Mark enjoyed walking and riding his bicycle. On November 28, 1987 in Galesburg, IL, Mark married Cindy S. Moore. Survivors include his three children; Ryan Cowgill of IL, Jason Cowgill and Emily Cowgill of TN, his mother, Joyce I. Cowgill of Markle, two sisters; Tamara S. (Keith) Stroud and Catherine J. (Kevin) Ewart both of Bluffton. Mark is also survived by nieces & nephews; Laura (Will) Stevens of Lafayette, Casey Ewart of Indianapolis, Kera (Dean Dyson) Habegger of Liberty Center, Kory (Cierra) Stroud of Ossian, Travis (Bridgette) Ewart of Bluffton and Pat Kelley of Ossian and an uncle, Jerry Cowgill of Albany, Indiana. He is preceded in death by his father Phillip, a brother Hugh O. Cowgill, his grandparents Alva B. Penrod, Edith O. Penrod and Mary Starr, along with an uncle & aunts; Harry W. Penrod, Robert & Anna Cowgill, Al & Mary Ester Pointer, Charles & LeEtta Cowgill and Kitty Cowgill, and a cousin, Mark Haslup, and a niece Stephanie Kelley. Funeral services will be held at 4 P.M. on Sunday (November 28, 2021) at the Thoma/Rich, Lemler Funeral Home in Bluffton, with calling hours from 1 P.M. to 4 P.M. on Sunday, prior to the service. Burial will take place at a later date at McFarren Cemetery. Memorials may be made to Bluffton First Church of the Nazarene or Alzheimer’s Association or to the family. Funeral arrangements have been entrusted to the care of the Thoma/Rich, Lemler Funeral Home in Bluffton. Friends can send online condolences to the family at www.thomarich.com.

Mark A. Cowgill, 60 of Bluffton, passed away Monday morning, November 22, 2021 at Byron Health Center in Fort Wayne. Mark was born on October 10, 1961 in Portland, Indiana to Phillip A. & Joyce I. (Penrod) Cowgill. He graduated from Bluffton... View Obituary & Service Information

The family of Mark A Cowgill created this Life Tributes page to make it easy to share your memories.

Mark A. Cowgill, 60 of Bluffton, passed away Monday morning,...

Send flowers to the Cowgill family.