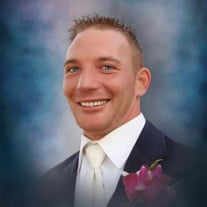 Mark Allen Clark, 34, of Bluffton passed away on Wednesday, September 19, 2018. Mark was born on January 7, 1984 in Fort Wayne, Indiana to Kevin M. Clark and Debra L. (Brandt) Klopfenstein. He attended Bluffton High School and worked in the construction trade. He will be remembered by his surviving family members; his mother Debra L. (James W. II) Klopfenstein of Craigville, his father Kevin M. Clark of Fort Wayne, along with his 2 daughters, Olivia E. Clark and Jaylinn M. Clark of Florida and a son Corbin P.W. Clark of Fort Wayne. Mark is also survived by 2 sisters; Holly A. (Adam) Zoll of Vera Cruz, Hayle A. (Zach) Ali of Parma, MI. and a brother James W. Klopfenstein III of Craigville. He is survived by his grandparents; Virginia Clark of New Haven, IN, Tom & Mel Bolen of Waterloo, IN, James & Nancy Klopfenstein of Harlan, IN and Dave & Cheryl Biberstine of Pasco, WA. Along with nieces and nephews; Noah, Logan & Hunter Zoll of Vera Cruz, Luke and Layla Ali, both of Parma, MI. and many Aunts, Uncles and Cousins. Mark is preceded in death by grandfathers; William W. Clark and Joseph A. Brandt. A Celebration of Life Service will be held at 11 AM on Saturday (OCTOBER 6,2018) at the Thoma/Rich, Lemler Funeral Home in Bluffton. Pastor Les Cantrell will officiate. Burial will follow at Six Mile Cemetery in Bluffton. Calling hours will take place from 9 AM to 11 AM, prior to the service at the funeral home. Memorials may be made in Mark’s memory to the family. Funeral arrangements have been entrusted to the care of the Thoma/Rich, Lemler Funeral Home in Bluffton. Friends can send online condolences to the family at www.thomarich.com.

The family of Mark Allen Clark created this Life Tributes page to make it easy to share your memories.

Mark Allen Clark, 34, of Bluffton passed away on Wednesday, September...

Send flowers to the Clark family.