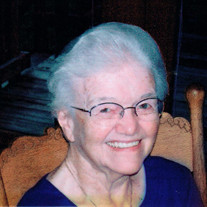 Marjory Ann Hayes, 92, of Liberty Center passed away November 28, 2015 at 6:35AM with her family by her side. Marjory was born on June 16, 1923 in Bath, New York to Leon and Ida (Dobbins) Roe. Marjory graduated from Bath High School in 1940. She married John Charles Hayes on June 21, 1941 in Bath, New York. John and Marjory had lived in New York and Michigan before moving to Liberty Center. John passed away November 22, 1969. Marjory had been a homemaker for many years. She later returned to study interior design at Indiana University Fort Wayne, earning an associate’s degree. Marjory was co-owner of E&M Interiors in Bluffton for several years. She had also worked many years at the Color Spectrum in Bluffton. Marjory was a long time member of the Liberty Center Baptist Church, where she served as financial secretary. She was a member of the American Baptist Women, where she served for many years as the local president. Marjory was also a member of the Wells County Homemakers Association. She had received the Homemaker of the year award. She had also volunteered in many other aspects during her life. Marjory was an avid reader, she enjoyed traveling and loved to spend time with her family and friends. Marjory is survived by her children, Linda (Herman) Kilbourn of Deer Lodge, TN, Judy (Dennis) Schmidt of Tavares, FL, Patricia (Jesse) Vidal of Pennville, John (Rebecca) Hayes of Wesley Chapel, FL, Gary (Edie) Hayes of Martinsville, Reginald (Phyllis) Hayes of Zanesville, 17 grandchildren, 32 great grandchildren, 7 gr. gr. grandchildren and sister, Helen of Bath, NY. Marjory was preceded in death by her Husband, siblings, Ellsworth, Irene and Calvin. Visitation will be held December 1st from 2:00PM to 8:00PM at the Thoma/Rich, Lemler Funeral Home 308 W. Washington St. Bluffton. A service to celebrate Marjory’s life will be held at the Liberty Center Baptist Church 3091 W Cherry St, Liberty Center at 11:00AM Wednesday December 2nd with Pastor Aaron Westfall officiating. Burial will follow at Mossburg Cemetery in Liberty Center. Visitation will also be held at the Church for one hour prior to the service. Memorials may be made in Marjory’s memory to the Liberty Center Baptist Church. Arrangements have been entrusted to the care of the Thoma/Rich, Lemler Funeral Home. Friends may share condolences with the family at www.thomarich.com

The family of Marjory Ann Hayes created this Life Tributes page to make it easy to share your memories.

Send flowers to the Hayes family.