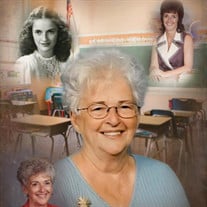 Mrs. Marjorie H. LaMar, 91 of Bluffton, passed away on Thursday morning, July 1, 2021, at Bluffton Regional Medical Center. She was born on December 31, 1929 in Bluffton, Indiana to Scott M. & Mary M. (Shady) Biddle. A lifetime residence of Wells County, she graduated from Bluffton High School in 1947 and obtained her teaching degree from IPFW in Fort Wayne. Mrs. LaMar taught English in the Northern Wells Middle School for 23 years, retiring in 1992. She was an active member of the First United Methodist Church in Bluffton. On April 13, 1973 in Bluffton, Marjorie married Joseph A. LaMar. Survivors include her husband of 48 years, Joe of Bluffton and children; Rebecca S. (Sam) Ringger, David M. Liddy, Terry L. (Pam) Liddy, all of Bluffton, Jennifer L. LaMar of Ligonier, Michael J. (Stacy) LaMar of Middletown, Matthew J. (Patricia) LaMar of Fort Wayne, along with 12 grandchildren, 20 great-grandchildren and 1 great-great-grandchild, and a sister, Floy Cowens of Ossian. She is preceded in death by a son, John Scott Liddy and a sister, Rosella Wolf Mills. Funeral services will be held at 2 P.M. on Saturday (July 3, 2021) at the Thoma/Rich, Lemler Funeral Home with Rev. Sherrie Drake and Steve Ringger officiating. Burial will follow at Six Mile Cemetery in Bluffton. Visitation will be held on Saturday from 11 A.M. to 2 P.M., prior to the service at the funeral home. The family prefers that memorials be made to the First United Methodist Church in Marjorie’s memory instead of flower arrangements. Funeral arrangements have been entrusted to the care of the Thoma/Rich, Lemler Funeral Home in Bluffton. Friends can send online condolences to the family at www.thomarich.com.

The family of Mrs. Marjorie H. LaMar created this Life Tributes page to make it easy to share your memories.

Mrs. Marjorie H. LaMar, 91 of Bluffton, passed away on Thursday...

Send flowers to the LaMar family.