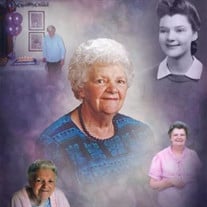 Marian I. Towne, 94 of Bluffton passed away on Tuesday morning, January 28, 2020, at Markle Health & Rehabilitation Center. She was born on September 14, 1925 in Newburgh, New York to David P. & Henrietta Elizabeth (Mackey) Lindsley. On December 16, 1950 in Rochester, New York, Marian and Calvin “Cal” E. Towne were married. They enjoyed 66 years together before he preceded her in death on April 17, 2017. A homemaker, Marian was a faithful member of the Bluffton First Church of the Nazarene. Survivors include her children: Calvin (Linnea) Towne of Springboro, Ohio, Gerald W. (Theresa) Towne of Markle, Steve (Mary) Towne of Poneto, Carol (Ruben) Rodriguez of Justin, Texas, Sharon (Randy) Eskew of Fort Wayne, Joanne (Scott) Landers of Bluffton and Susie (Ken) Towne-Powell of Ossian. She is also survived by 34 grandchildren and 41 great-grandchildren. Marian is also survived by her siblings; Ruth E. Johnson of New York and Roy A. (Lori) Lindsley of New York. She is preceded in death by a daughter Marian E. Girod in 2002 and her brother, David P. Lindsley. Marian’s calling hours and service will both take place at the church she loved, Bluffton Church of the Nazarene, 1515 Clark Avenue in Bluffton. Calling hours will be held from 2 P.M. to 8 P.M. on Friday (Jan. 31st) at the Bluffton Church of the Nazarene with the funeral service at 10 A.M. on Saturday (Feb. 1st.) at the Bluffton Church of the Nazarene, with calling for one hour prior to the service. Rev. Tim Miller will officiate. Burial will follow at Elm Grove Cemetery in Bluffton. Memorials may be made to Good News Club of the Child Evangelism Fellowship or Autism Awareness Organization. Funeral arrangements have been entrusted to the care of the Thoma/Rich, Lemler Funeral Home in Bluffton. Friends can send online condolences to the family at www.thomarich.com.

The family of Marian I. Towne created this Life Tributes page to make it easy to share your memories.

Marian I. Towne, 94 of Bluffton passed away on Tuesday morning,...

Send flowers to the Towne family.