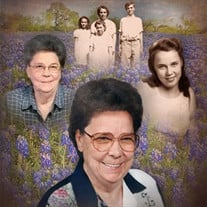 Margie (Grogg) Foltz, 89, of Bluffton, passed away on Wednesday morning, April 3, 2019, at Signature Health Care in Bluffton. Margie was born on April 21, 1929 in Burkburnett, TX to Noah Awbrey & Alma (Hayes) Awbrey. Margie attended school in Archer City, TX. She loved every one of her grandchildren and made friends with everyone that she came into contact. Margie loved her church. Margie was the best mother-in-law on earth. Blue bonnet flowers were her favorite. She lived her entire life in Wichita Falls, TX and Wells County, and was a member of New Beginning Church. Margie married Loyall Grogg on July 1, 1944. He preceded her in death in 1970. Margie and Eugene Donald “Don” Foltz were married on June 6, 1978 in Kentucky and he preceded her in death on 2012. Survivors include three children; Allen (Sheila) Grogg of Bluffton, Wanda Nevil of Bluffton, Dean Grogg of Bluffton, and five step-children; Garry (Julie) Foltz of Bay Port, Michigan, Eugenia “Gina” Brewster of Berne, Indiana, Timothy (Lanice) Foltz of Roann, Indiana, Ken (Rhonda) Foltz of Bryant, Indiana, Lou Ann (Dale) Langstaff of Brigdon, Ontario. She is also survived by 21 grandchildren and 27 great-grandchildren. She is preceded in death by her parents, her husbands, her brother Weldon Awbrey and a sister, Edwina Waddell. Calling hours are from 3:00 - 8:00 P.M. on Friday, April 5, 2019 on and one hour prior to services Saturday, April 6 at Thoma/Rich, Lemler Funeral Home. Funeral service is at 11:00 A.M. at the funeral home with Pastor Steve Sutton officiating. Burial will be in Fairview Cemetery in Bluffton. Preferred memorials are to the New Beginning Church. Funeral arrangements have been entrusted to the care of the Thoma/Rich, Lemler Funeral Home in Bluffton. Friends can send online condolences may be made at www.thomarich.com.

The family of Margie Foltz created this Life Tributes page to make it easy to share your memories.

Margie (Grogg) Foltz, 89, of Bluffton, passed away on Wednesday...

Send flowers to the Foltz family.