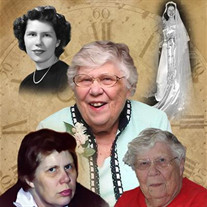 Margaret Nyffeler, 93 passed away Sunday morning, July 28, 2019 at Christian Care Retirement Community in Bluffton. She was born October 2, 1925 in Indianapolis, Indiana to Alexander and Robina (West) Spink, who emigrated here from Scotland. She graduated from Shortridge High School and Butler University in Indianapolis, where she received her BS in Dietetics. She worked as a dietician in Chicago and Indianapolis. On June 26, 1949 she married Bruce Nyffeler. After taking time off to be a homemaker, she worked at Sears in Bluffton. In her late 50s, Margaret went back to school to become an LPN and she worked for many years at Meadowvale. She was a member of First Presbyterian Church, Tri-Kappa and Delta Gamma Sororities. She is survived by two sons; Doug Nyffeler of Ossian and Jim (Nancy) Nyffeler of Fort Wayne and a daughter Jean (Mike) Studabaker of Bluffton. She is also survived by six grandchildren; Katie (Shane) Maller, Christopher (Amy) Studabaker, Lisa (Landin) McSorley, Matthew (Danielle) Studabaker, Kayleigh (fiancé Michael Bucci) and Andrew Nyffeler, along with six great-grandchildren; Trace, Jaiden, Lane, Aria, Harrison and Elliott. She was preceded in death by her husband Bruce, her parents, a daughter Carolyn S. Nyffeler, a daughter-in-law Marilyn Nyffeler, and great-grandson Luke. Calling hours will be held from 3 to 8 P.M. on Tuesday at the Thoma/Rich, Lemler Funeral Home in Bluffton. A service to celebrate Margaret’s life will be held at 10:30 A.M. on Wednesday (July 31, 2019) at the funeral home with calling for one hour prior to the service. Rev. Lyle Ewing will officiate. Burial will follow at Elm Grove Cemetery. Memorials may be made in Margaret’s memory to First Presbyterian Church in Bluffton. Funeral arrangements have been entrusted to the care of the Thoma/Rich, Lemler Funeral Home in Bluffton. Friends can send online condolences to the family at www.thomarich.com.

The family of Margaret Nyffeler created this Life Tributes page to make it easy to share your memories.

Send flowers to the Nyffeler family.