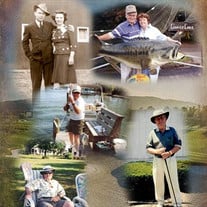 Malcolm E. Hiday, 97, of Ossian, passed away Wednesday evening, March 27, 2019, at Ossian Health & Rehab. Center. Malcolm was born on September 8, 1921 in Noblesville, Indiana to Harry & Mary (Smith) Hiday. He graduated from Petroleum High School in 1939. On January 13, 1940, Malcolm and Justine L. (Davenport) Hiday were married. They recently celebrated their 79th wedding anniversary. Malcolm was a lifelong dairy farmer. Malcolm and Justine lived in Pennville and ran the family diary operation until they moved to Ossian in 1964. He continued his dairy farm until he retired at the age of 65. After retirement, they enjoyed spending the winters in Fort Myers Beach, FL., and Malcolm became a full-time golfer and an avid fisherman. He was a member of the Ossian United Methodist Church. Survivors include his wife Justine, of Ossian along with five children; Larry (Nedra) Hiday of Bluffton, Sonja DeHoff of Bluffton, Dixie “Diane” (Thomas) Hedges of Gallatin, TN., Mary Lou (Gary) Adams of Leesburg and Cheryl (Ted) Martz of Ossian, along with 16 grandchildren and 38 great-grandchildren. Malcolm is preceded in death by a grandchild, a great-grandchild and siblings; Joe Hiday, Juanita Martin, Chester Hiday, Harold “Dutch” Hiday and Marilee Blankenbecker. Visitation will be held from 12 Noon to 6 P.M. on Sunday (March 31, 2019) at the Thoma/Rich, Lemler Funeral Home in Bluffton, and for one hour prior to the service. Funeral services will be held at 10:30 A.M. on Monday (April 1, 2019) at the funeral home with Rev. Lyle Ewing officiating. Burial will follow at Elm Grove Cemetery in Bluffton. Memorials may be made in Malcolm’s memory to Heart to Heart Hospice or Ossian United Methodist Church. Funeral arrangements have been entrusted to the care of the Thoma/Rich, Lemler Funeral Home in Bluffton. Friends can share memories and online condolences with the Hiday family at www.thomarich.com.

The family of Malcolm E. Hiday created this Life Tributes page to make it easy to share your memories.