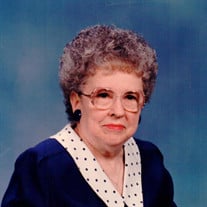 Maenette Watters, 92 of Bluffton passed away at 8:15 a.m. on Monday (May 16, 2016) at Christian Care Retirement Community in Bluffton. Maenette was born on January 18, 1924 in Wells County to Harry A. & Edith Gertrude (Grove) Johnson. A lifelong resident of Wells County, she graduated from Bluffton High School with the class of 1941 and worked as an Abstractor for the John W. Carnall Title Company in Bluffton for 20 years, retiring in 1976. Maenette was a long time member of the First Reformed Church in Bluffton, the Wells County Historical Society and the Candlewick Club, a past member of Psi Iota Xi Sorority, JIO Circle and the B.H.S. Alumni Association serving as the Board Treasure. She enjoyed spending her free time searching family history and doing genealogy. On July 6, 1947 in Bluffton, Maenette and Earl L. “Bud” Watters were married. They shared 58 years of marriage before he preceded her in death on January 1, 2005. She is survived by a son David E. (wife Anne) Watters of Albuquerque, New Mexico along with two granddaughters: Kristen (husband: Daniel) Sandoval of Albuquerque, N.M, Rebecca Watters and husband Joseph Kuipers of Kalamazoo, MI and two great-grandsons Gabriel & Roman Sandoval and a step-great-granddaughter Hazel VonMaur. She is preceded in death by her parents, husband, two brothers; Thomas Richard Johnson and Donald K. Johnson and two sisters; Helen Jean Gilbert Lesh and Harriette Lucile Case. A service to celebrate Maenette’s life will be held at 11 a.m. on Friday (May 20, 2016) at the Thoma/Rich, Lemler Funeral Home in Bluffton. Dr. Bryson E. “Gene” Bell will officiate. Calling hours will be held from 5 p.m. to 8 p.m. on Thursday at the funeral home and for one hour prior to the service. Burial will follow at Elm Grove Cemetery in Bluffton. Memorials may be made to the First Reformed Church, Christian Care Retirement Community or to Family Life Care of Berne. Funeral arrangements have been entrusted to the care of the Thoma/Rich, Lemler Funeral Home in Bluffton. Friends can send online condolences to the family at www.thomarich.com.

Maenette Watters, 92 of Bluffton passed away at 8:15 a.m. on Monday (May 16, 2016) at Christian Care Retirement Community in Bluffton. Maenette was born on January 18, 1924 in Wells County to Harry A. & Edith Gertrude (Grove) Johnson. A lifelong... View Obituary & Service Information

The family of Maenette Watters created this Life Tributes page to make it easy to share your memories.

Send flowers to the Watters family.