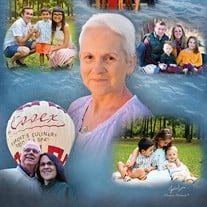 Linda D. Shafer, 63, of Bluffton, passed away on Wednesday morning, February 13, 2019, at her residence, surrounded by her family. Linda was born on October 10, 1955 in Berkeley, California to Richard M. & Mary E. (Sauter) Baker. Linda served our country as a Petty Officer 3rd Class in the United States Navy from 1974 to 1978. She attended Mt. Diablo College and United States Navy Corp. School. Linda retired after 38 years working as a Certified Medical Assistant with Redi-Med and formerly worked at Bluffton Regional Medical Center and the Caylor-Nickel Clinic. She attended Park Church and was as a member and a former president of Bluffton Community Women. Linda married Kelly L. Shafer on October 16, 1976 at Pleasant Hill, California. Survivors include her husband Kelly of Bluffton, son, Casey (Sylvia) Shafer of Carmel, daughter, Lindsey (Landon) Eads of Bluffton and three grandchildren; Lyla, Pace & Lachlan. Linda is also survived by a brother, Nick (Denise) Baker of Cool, CA and a sister, Shirley Adams of Pittsburg, CA. Linda is preceded in death by her parents and two brothers, Michael & Rick Baker. Calling Hours will be held from 2 to 8 on Friday (Feb. 22) at the Thoma/Rich, Lemler Funeral Home in Bluffton & for one hour prior to the service on Saturday. A Service to Celebrate Linda’s life will take place at 11 A.M. on Saturday (Feb. 23, 2019) at the funeral home with Pastor Dennis Wood officiating. Military honors will be by the American Legion Post #111 of Bluffton and the United States Navy Honor Guard, at the conclusion of the service at the funeral home. Interment will take place at a later date at Elm Grove Cemetery in Bluffton. In Lieu of flowers, the family strongly prefers memorials be given to the Friends Who Care Cancer Relief Foundation or Park Church. Funeral arrangements have been entrusted to the care of the Thoma/Rich, Lemler Funeral Home in Bluffton. Friends can send online condolences to the family at www.thomarich.com.

The family of Linda D Shafer created this Life Tributes page to make it easy to share your memories.

Linda D. Shafer, 63, of Bluffton, passed away on Wednesday morning,...

Send flowers to the Shafer family.