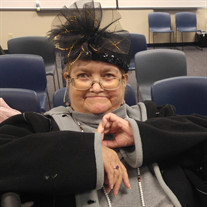 Linda L. Lemmon, 70, of Bluffton passed away on Wednesday, December 18, 2019, at Parkview Randallia Hospital in Fort Wayne. Linda was born on December 5, 1949 in Santa Cruz, California to Phillip L. & Elsie O. (Ekenberg) Stewart. She graduated from Lockport High School in 1969. A former member of the Red Hat Society, Linda worked at Western Union, Western Electric and for the United States Postal Service. She attended Forgiven Church in Bluffton. On November 12, 1969 in Raleigh, N.C., Linda and Robert Lemmon were married. They recently celebrated their golden 50th wedding anniversary. Survivors include her husband Robert of Bluffton and two children; Jennifer (Jason) Mankey of Decatur and Kenneth Lemmon of Demming, NM. and four grandchildren; Cameron Rauch, Jared W. Mankey, Lance Lemmon and Kahla Lemmon. Linda is preceded in death by her parents, a daughter, Tiffany L. Lemmon on June 22, 2019, two brothers Steve & Bruce and a sister, Barbara. A service to celebrate Linda’s life will be held at 4 P.M. on Sunday (Dec. 29th) at Forgiven Church, 1409 S. Main Street in Bluffton, with Pastor Scott Ochsner officiating. Visitation will be held from 3 to 4 P.M. at the church, prior to the service. Memorials may be made in Linda’s memory to the family through the funeral home. Funeral arrangements have been entrusted to the care of the Thoma/Rich, Lemler Funeral Home in Bluffton. Friends can send online condolences to the family at www.thomarich.com.

The family of Linda L. Lemmon created this Life Tributes page to make it easy to share your memories.

Linda L. Lemmon, 70, of Bluffton passed away on Wednesday, December...

Send flowers to the Lemmon family.