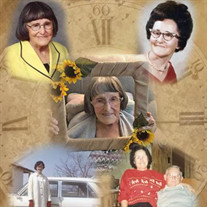 Lena Marie (Wilson) Musselman, 83 of Heritage Pointe of Warren, passed away late Monday evening, November 22, 2021 at Parkview Hospital in Huntington. She was born on July 15, 1938 in Olive Hill, Kentucky to Robert & Norma (Roe) Wilson and graduated from Olive Hill High School. She married Paul J. Musselman on September 4, 1966 in Warren. They shared 34 years of marriage before he preceded her in death on December 31, 2000. Lena was a homemaker for 55 years and worked at Heritage Pointe in Warren. She enjoyed doing crafts and loved to watch Jeopardy & Wheel of Fortune on T.V. Along with her enjoyment for reading, she enjoyed collecting angels and dolls. Lena made the world’s best peanut butter fudge for her family and friends! Survivors include her daughter, Michele R. (Richard) Hampton of Poneto, her grandchildren that she dearly loved; Kyle (Lauren) Hampton of Marion, Austin Hampton of San Antonio, TX. and Jayla Hampton of Markle, along with 5 great grandchildren. Lena was born the 3rd of 12 children in her family. She is survived by her siblings; Talmage (Donna) Wilson of Springfield, OH., Mike (Dottie) Wilson of Winchester, KY, Robert (Judy) Wilson of Olive Hill, KY, Barb (Bob Graves) Trent of Columbus, OH, Carol (Jack) Wilson of Williamsburg, VA and Teresa (Kenny) Binion of Olive Hill, KY. She is preceded in death by her parents, husband and siblings; Carl Wilson, Delores Thompson, Kenneth Wilson, Terry Wilson and Rita Coots. Funeral services will be held at 12 Noon on Saturday (December 11, 2021) at the Thoma/Rich, Lemler Funeral Home in Bluffton with Pastor Steven Spencer officiating. Friends are invited to visit with the family for one hour prior to the service. Burial will follow at Woodlawn Cemetery in Warren, next to her husband. Memorials may be made in Lena’s memory to Heritage Pointe of Warren. Funeral arrangements have been entrusted to the care of the Thoma/Rich, Lemler Funeral Home in Bluffton. Friends can send online condolences to the family at www.thomarich.com.

The family of Lena M. Musselman created this Life Tributes page to make it easy to share your memories.

Send flowers to the Musselman family.