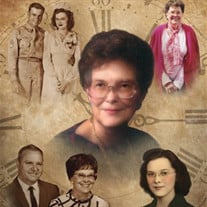 Lena J. Knowles, 96, of Bluffton, passed away peacefully on Wednesday morning, October 3, 2018, at Markle Health & Rehabilitation Center in Markle, Indiana. She was born on August 27, 1922 in a log cabin in Poneto, Indiana to Earl E. & Mable Devona (Hedges) Betts. On that day so long ago, Lena began her life on this earth with a kind spirit and a determined mind. She lived her life to the fullest and never gave up in her pursuit of happiness. She enjoyed quilting, hiking, traveling, eating out at The Dutch Mill and Richards Restaurant in Bluffton and spending time with her family. She celebrated her faith and worshiped at the Jehovah’s Witness Kingdom Hall in Bluffton, Indiana. Her kindness touched many and her heart was big enough to love everyone. On July 24th, 1943 Lena married Marion T. Knowles from Liberty Center, Indiana and they began their grand adventure. His 20-year service in the United States Army Air Corps and then, later the United States Air Force gave them many opportunities to travel and see the sights outside their native Indiana. When they returned after his retirement they bought a farm outside of Poneto and made Wells County, Indiana their permanent home. He preceded her in death on September 27th, 1974. Lena is survived by her children, Lon (Thelma) Knowles of Hudson, IN, LaNae (Bruce) Golder of Bluffton, Mitchell (Deb) Knowles of Niceville, FL, along with 19 grandchildren, 27 great-grandchildren, 2 great-great grandchildren and numerous nieces and nephews. She is also survived by her brothers Jay (Nancy) Betts of Petroleum and Vaughn Betts of Fort Wayne. She is also preceded in death by her twin sister Leela, her sons Marion Jr (MT), Marlin, Marlo and her brother Gene. Funeral services will take place at 10:30 A.M. Monday (Oct. 8th) at the Thoma/Rich, Lemler Funeral Home in Bluffton. Burial will follow at Grove Cemetery in Poneto, Indiana. Calling hours will be held from 5 to 7 on Sunday at the funeral home. Memorials may be made to the American Heart Association. Funeral arrangements have been entrusted to the care of the Thoma/Rich, Lemler Funeral Home in Bluffton. Friends can send online condolences to the family at www.thomarich.com.

Lena J. Knowles, 96, of Bluffton, passed away peacefully on Wednesday morning, October 3, 2018, at Markle Health & Rehabilitation Center in Markle, Indiana. She was born on August 27, 1922 in a log cabin in Poneto, Indiana to Earl E. & Mable... View Obituary & Service Information

The family of Lena J. Knowles created this Life Tributes page to make it easy to share your memories.

Lena J. Knowles, 96, of Bluffton, passed away peacefully on Wednesday...

Send flowers to the Knowles family.