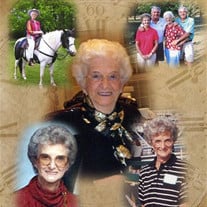 LeaBeth “Cookie” Raber Rosie, 96, of Bluffton passed away on Monday afternoon, September 2, 2019, at River Terrace Estates in Bluffton. Cookie was born on October 25, 1922 in Kewanna, Indiana to William H. & Bertha Grace (Jones) Cook and the family moved to Monroeville, IN in 1927 and she graduated of Monroeville High School in 1940. After graduating from Ft. Wayne Business School, she worked in the Cost Department of General Electric until her marriage to J. Wayne Raber in 1944, and he preceded her in death in 1989. She loved the farm life where they raised three children. She was an active member of the Liberty Center Methodist Church and served four years as the District Treasurer of the U.M.W. In 1994, she moved to Bluffton and moved her church membership to Bluffton First United Methodist Church. Cookie loved being with her family and enjoyed all sports, reading, cards and helping others. On January 1999, Cookie and Don Rosie were married and their happy lives continued until he preceded her in death in 2014. Survivors include 2 sons, Sid (Susie) Raber of Bluffton and Randy (Mary) Raber of Bellevue, WA and a daughter, Cindy Lieurance of Ossian, and 8 grandchildren and 15 great-grandchildren. She is also survived by 2 stepsons, Don (Debra) Rosie and John (Terri) Rosie, 3 step-daughters, Lynne (John) Walters and Dawn Rosie and Mariah Rosie. Cookie is preceded in death by her parents, husbands, a son-in-law, Larry Lieurance and a sister, Lucille Voirel. Visitation hours will take place from 12 Noon to 2 P.M. on Sunday (Sept. 8th) at the Thoma/Rich, Lemler Funeral Home. A service to celebrate Cookie’s life will be held at 2 P.M. on Sunday (September 8, 2019) at the Thoma/Rich, Lemler Funeral Home in Bluffton with Pastor Jerry Qualls officiating. Memorials may be made in Cookie’s memory to the First United Methodist Church of Bluffton or the Liberty Center United Methodist Church. Funeral arrangements have been entrusted to the care of the Thoma/Rich, Lemler Funeral Home in Bluffton. Friends can send online condolences to the family at www.thomarich.com.

The family of LeaBeth "Cookie" Raber - Rosie created this Life Tributes page to make it easy to share your memories.

LeaBeth “Cookie” Raber Rosie, 96, of Bluffton passed away on...