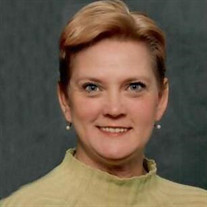 Lavon D. Ivins, 60, of Bluffton passed away early Tuesday morning, November 7, 2017, at Bluffton Regional Medical Center. She was born on June 22, 1957 in Fort Wayne to Wayne E. & Patricia “Patti” Ann (Safewright) Penrod. She graduated from Southern Wells High School in 1975. She retired from Bluffton Walmart from the Lawn and Garden Center in 2009. She enjoyed gardening, working in her flower beds and reading. On June 21, 2003 in Bluffton, Lavon and Kevin R. Ivins were married. Survivors include her husband Kevin of Bluffton, her father Wayne of Poneto, and two children: Casey (Mike) Householder of North Judson and Logan (Anne) Gerber of Fort Wayne. She was a proud “Min” to three grandchildren: Emiley, Michael & Alyssa Householder of North Judson. Lavon is also survived by a brother Richard (Stacey) Penrod of Bluffton, mother-in-law, Evelyn Ivins, brother-in-law, Brent (Julie Johnston) Ivins and a sister-in-law, Kim Ivins, all of Bluffton She is preceded in death by her mother Patti on January 5, 2012 and father-in-law Edson L. Ivins December 1, 2010. A service to celebrate Lavon’s life will be held at 1:30 P.M. on Saturday (November 18, 2017) at the Thoma/Rich, Lemler Funeral Home in Bluffton. Pastor Jim Poling will officiate. A private family burial will take place at Grove Cemetery. The family prefers that memorials may be made in Lavon’s memory to the Wells County Animal Shelter. Lavon’s arrangements have been entrusted to the care of the Thoma/Rich, Lemler Funeral Home in Bluffton. Friends can send online condolences to the family at www.thomarich.com.

The family of Lavon D Ivins created this Life Tributes page to make it easy to share your memories.

Send flowers to the Ivins family.