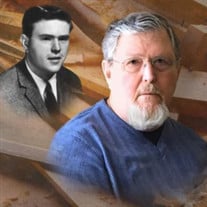 Larry Alvin Gilly, 76 of Bluffton, passed away Tuesday, November 24, 2020 at Markle Health and Rehab Center in Markle. He was born on August 23, 1944 in Portland to Noah Alvin & Mary Gilmore (Gibson) Gilly. A 1964 graduate of Pennville High School, Larry served in the U.S. Army in Vietnam from 1965 to 1967. He worked for Portland Forge for 43 years, retiring in January 2007. Larry was a member of the American Legion Post #111 of Bluffton, the Bluffton Optimist Club and the First Baptist Church. He enjoyed woodworking. On December 5, 1969, Larry and Karyn Jo Foltz were married. Survivors include his wife of 51 years, Karyn of Bluffton and their children; Larry Matthew (Hollie) Gilly of Bluffton, Tonya (Matthew) Claycomb of Pennville, and Mindi (Lance) Sprunger of Berne, along with 10 grandchildren; Aidan, Micah & Hallie Gilly, Shelby (Joe) Kipfer of Bluffton, Tyler Claycomb of Warsaw, Noah Claycomb of Lynchburg, VA, Lathan Luginbill, Makenna Luginbill and Kit Sprunger, all of Berne, two great-grandchildren Arianna Jo & Clara Lynn Kipfer, and two sisters; Nadine (Bill) Ray of Dunkirk and Fay (John) Horn of Fuquay Varina, NC. Larry is preceded in death by his parents, siblings Mabry Andrews, Louise Stultz, Edith Watkins, Joanne Lawhorn, and Harold Gilly, Private family services will be held at the Thoma/Rich, Lemler Funeral Home in Bluffton with Pastor Les Cantrell officiating. Burial will follow at I.O.O.F. Cemetery in Pennville. Friends wishing to watch Larry’s service can do so from the safety of their home, utilizing a Zoom Meeting. You can login using the Zoom Meeting I.D. # 858 4675 4363 and you can login after 1:15 P.M. on Sunday, November 29, 2020. Memorials may be made to Alzheimer’s Association or the Bluffton Optimist Club and may be sent to the funeral home. Funeral arrangements have been entrusted to the care of the Thoma/Rich, Lemler Funeral Home in Bluffton. Friends can send online condolences to the Gilly family at www.thomarich.com.

Larry Alvin Gilly, 76 of Bluffton, passed away Tuesday, November 24, 2020 at Markle Health and Rehab Center in Markle. He was born on August 23, 1944 in Portland to Noah Alvin & Mary Gilmore (Gibson) Gilly. A 1964 graduate of Pennville High... View Obituary & Service Information

The family of Larry A. Gilly created this Life Tributes page to make it easy to share your memories.

Send flowers to the Gilly family.