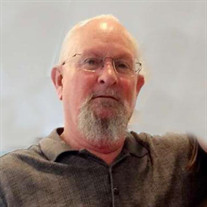 Larry A. Garrett, 73 of Ossian, passed away on Saturday afternoon, February 6, 2021, at Bluffton Regional Medical Center. Larry was born on December 7, 1947 in Bluffton to Max A. “Pat” & Lorene M. (Ireland) Garrett. He graduated from Liberty Center High School in 1966 and played on the record setting basketball team that played against Swayzee for 9 overtimes! Larry was a talented carpenter. He worked for James S. Jackson Co., Briner Building and owned and operated his own contractor business for many years. He had a passion for cooking for others and was currently the owner & operator of Hoosier Kitchen Food Truck. He was one of the founders and very involved in the Crosbie & Gabe Memorial Wiffleball Tournament for the last 8 years. Larry enjoyed working outside in the garden, attending his grandchildren’s sporting events and was a huge fan of Indiana Basketball, The Colts and the Pacers. Larry could be described as a Christmas “Junkie” and would spend days setting up his Christmas lights and villages for his family and neighbors to enjoy! Larry is survived by his partner, Elaine Pratt of Ossian, two sons; Patrick A. (Jennifer) Garrett of Fort Wayne and Jay (Andrea) Garrett of Markle, step-children; Bracken C. (Krystal) Douglas of Rising Sun, IN, Shanna (Josh) Bradley of Fort Wayne and Mary (Troy) Douglas of Naperville, IL. He was a proud grandpa to 11 grandchildren; Emma, Dawson, Tessa, Cohen, Libby, Matthew, Casen, Gaige, Emmree, Holden and Selah, two sisters; Laurie (Michael) Russell of Poneto, Michelle Suman of Bryant and Diane Garrett of Ossian. He is preceded in death by his parents and a brother, Anthony Gray Garrett. A time to gather, share stories and remember Larry will be held from 3 to 5 P.M. on Saturday, (Feb. 27, 2021) at the Thoma/Rich, Lemler Funeral Home in Bluffton. In lieu of flowers, the family prefers memorials be made to the Crosbie & Gabe Wiffleball Tournament and can be sent to the funeral home. The safety of the family and all visitors is our utmost priority. For everyone’s safety, we ask that you practice social distancing. Masks are required for visitation and for the funeral service. During the current guidelines, we are only allowed a limited number of people in the building at a time. We appreciate your cooperation and patience. Funeral arrangements have been entrusted to the care of the Thoma/Rich, Lemler Funeral Home. Online condolences may be sent to the family at www.thomarich.com.

The family of Larry A. Garrett created this Life Tributes page to make it easy to share your memories.

Larry A. Garrett, 73 of Ossian, passed away on Saturday afternoon,...

Send flowers to the Garrett family.