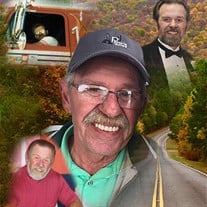 Larry D. Colen, 72 of Wapakoneta, Ohio and a longtime Bluffton resident, passed away on Sunday, February 2, 2020, at St. Rita’s Hospital in Lima, Ohio. Larry was born on June 4, 1947 in Bluffton to William Colen and Anna Louise (McAfee) Kaufman. A 1965 graduate of P.A. Allen High School, Larry went on to serve his country in the United State Air Force from 1965 to 1969 and was honorably discharged with the rank of Sergeant (E-4). Larry was a former member of the First Evangelical & Reformed Church and a member of the American Legion Post #111 of Bluffton. Larry retired from a career of over the road truck driving in 2019. On January 8, 2000, Larry and Susan (Flor) Colen were married in Port St. Lucie, Florida. Survivors include his wife Susan of Wapakoneta, Ohio along with a daughter Tiffany Sporn of Buhler, KS and 10 grandchildren; Ian Sporn, Lane Sporn, Taylor Sporn, Grant Sporn, Kirsti Rodriguez, Taylor Hesseling, Auston Presar, Aaron Presar, Emma Presar and Andrew Presar, along with 5 great-grandchildren. Larry is also survived by his mother, Anna Louise Kaufman of Bluffton and siblings; Les (Mary) Colen of Bismarck, ND and Pamela (Steve) Paxson of Roanoke, a son-in-law, Dennis (Jeanie) Loomis of Delphos, OH and a daughter-in-law, Kathy Lynn Loomis of Monroe, OH. A service to celebrate Larry’s life will be held at 10:30 A.M. on Friday (Feb. 7th) at the Thoma/Rich, Lemler Funeral Home in Bluffton with Dr. Bryson “Gene” Bell officiating. Burial will follow at Fairview Cemetery in Bluffton with full military honors by the United States Air Force Honor Guard and the American Legion Post #111 of Bluffton Honor Guard. Calling Hours will be held from 3 P.M. to 7 P.M. on Thursday (Feb. 6th) at the funeral home and for one hour prior to the service. Memorials may be made to the American Heart Association. Funeral arrangements have been entrusted to the care of the Thoma/ Rich, Lemler Funeral Home in Bluffton. Friends can send online condolences to the family at www.thomarich.com.

The family of Larry D. Colen created this Life Tributes page to make it easy to share your memories.

Larry D. Colen, 72 of Wapakoneta, Ohio and a longtime Bluffton...

Send flowers to the Colen family.