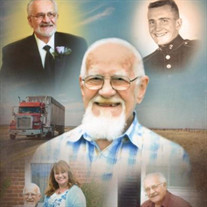 **Friends wishing to watch Larry’s service can do so from the safety of their home, utilizing a Zoom Meeting. You can login using the Zoom Meeting I.D. # 899 5005 9582 and you can login after 1:15 P.M. on Sunday.** Larry Wayne Aker 78, of Decatur passed away Tuesday morning March 9, 2021 at his residence. Larry was born and raised in Mercer County, OH on November 15, 1942 to Ray William Aker and Cleo Marie (Bennett) Aker. He grew up with four sisters and four brothers being raised by his parents. Playing paratrooper, bailing hay, canoeing, and camping is how he had the most fun with his brothers growing up. His father, Ray Aker, influenced him the most before joining the Marine Corps at the age of eighteen. Larry then went on to serve in West Asia including six countries in a thirteen-month time period. His Marine Corps service is his most proud accomplishment in his lifetime. After returning home from his four year and four-month service, Larry was an OTR truck driver for more than 30 years! He traveled all over the United States enjoying Johnny Cash and Elvis Presley’s music. Country Western and “Oldies” are also at the top of his music list. Larry is an avid photographer, and if you know him well, he’s a decent story teller too. He enjoyed riding horses, working on motorcycles, collecting old cars and trucks in his younger years. More recently, he enjoys taking photos of all things and spending precious time with his family. Larry is very proud of his daughter, three grandchildren, and five great-grandchildren. He spends as much time with them as possible and they are all dearly loved. Some advice Larry had to share was, “Quit being so computerized and use your common sense!” He would like to be remembered as he was; smiling and sitting in his chair. Content with his life, Larry shared the secret to a good life: “Take care of yourself. Live life as happily as you can.” He is survived by his daughter Karrie M. Carpenter (Todd Whittenberger), three grandchildren Courtney Raye Pebley (Nick Biddlecome), Dylan Michael Scott Aker (Sydney), Thomas Wayne Ketron, five great-grandchildren Cruz, Alijah, Mason, Rowan, and Maverick, siblings; Sylvia McBride, Nancy Schott, John Brian Aker, Kathy Shaw, Jeanne Ripple, David Aker (Linda), Kenny Aker, Tim Aker. Larry is preceded in death by his parents. A service to celebrate Larry’s life will be held at 1:30 P.M. on Sunday, March 14, 2021, at the Thoma/Rich, Lemler Funeral Home in Bluffton. There will be military honors by the United State Marines and the American Legion Post #111 of Bluffton. Calling hours will be held from 4 P.M. to 7 P.M. on Saturday at the funeral home. Memorials may be made in Larry’s memory to the family to assist with final expenses. The safety of the family and all visitors is our utmost priority. For everyone’s safety, we ask that you practice social distancing. Masks are required for visitation and for the service. During the current guidelines, we are only allowed a limited number of people in the building at a time. We appreciate your cooperation and patience. Funeral arrangements have been entrusted to the care of the Thoma/Rich, Lemler Funeral Home. Online condolences may be sent to the family at www.thomarich.com.

The family of Larry Wayne Aker created this Life Tributes page to make it easy to share your memories.

**Friends wishing to watch Larry’s service can do so from the...

Send flowers to the Aker family.