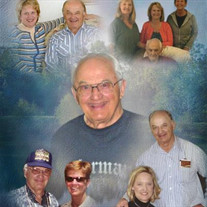 Kenneth N. “Kenny” Fetters, 86, of Bluffton, passed away on Tuesday, February 5, 2019, at Lutheran Hospital in Fort Wayne. Kenny was born on March 1, 1932 in Bluffton to Ralph & Ruby (Goodspeed) Fetters. After graduating from Bluffton High School in 1951, Kenny honorably served our country in the United States Coast Guard from 1952 to 1959. He worked for Panhandle Eastern in Bluffton for several years. Kenny married Viola (Smith) Fetters on February 5, 1993 and she precedes him in death on October 14, 2007. Upon retirement, Kenny and Viola moved to Knapp Lake in northern Indiana. Kenny was an avid outdoorsman who loved fishing and hunting with his family and friends. With equal zest, he worked diligently for the Knapp Lake Conservation Club to preserve the natural beauty of the environment. Kenny was preceded in death by his parents, brothers; Max & Jerry Fetters, and a sister; Janet VanZant. Survivors include his sister, Joyce Thoman of Indianapolis, IN, three daughters; Denise (Tom) Oswalt of Bluffton, Julie Fetters of Granite Shoals, TX and Diane (Patrick) McArdle of Shawnee, KS. Kenny will be fondly remembered as “Grandpa Ken” by his 7 grandchildren, 9 great-grandchildren, and his nieces and nephews. A funeral service will be held at 2 P.M. on Sunday (Feb. 10th) at the Thoma/Rich, Lemler Funeral Home in Bluffton. The Rev. Lyle Breeding will officiate. Visitation will be held on Sunday, from 12 until 2 P.M., prior to the service. Burial will take place at Six Mile Cemetery in Bluffton with Military Honors by the American Legion Post #111 Honor Guard of Bluffton and the United States Coast Guard. In lieu of flowers, the family asks that donations in memory of Kenny be made to the American Legion Post #111 Honor Guard of Bluffton. Funeral arrangements have been entrusted to the care of the Thoma/Rich, Lemler Funeral Home in Bluffton. Friends can send online condolences to the family at www.thomarich.com.

The family of Kenneth N. Fetters created this Life Tributes page to make it easy to share your memories.

Send flowers to the Fetters family.