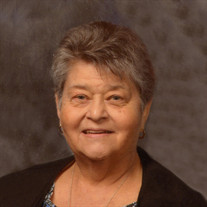 Kay Sue (Davison) Hiester, 69, of Bluffton, passed away at 4:15 P.M., June 11, 2015 at River Terrace Estates in Bluffton. Kay was born in Bluffton on February 8, 1946 to Vaughn and Margie (Richardson) Davison. Kay graduated from Lancaster Central in 1964 and went on to earn her Associates Degree in Early Childhood Development from Ivy Tech, among other certifications. Kay married Thomas Wayne Hiester on June 5, 1965 in Bluffton, and they just celebrated their 50th wedding anniversary. Kay was a lifelong resident of Bluffton and dedicated her life to children. She began her career as owner and operator of the Home Daycare “Buttons & Bows” for 23 years, and then moving on to Early Childhood Alliance for 22 years. Kay was a member of the Bluffton First Church of Christ and was a lifelong nurturer. From Scouting, to Church and Childcare, she was a mothering influence to everyone and always put others first. She was fond of saying, “It is what it is,” and this, too, is what it is; a life well-lived. Kay will be greatly missed by her many friends and family. Kay is survived by her Husband, Thomas, and Daughters: Michele (Terry) Marcum of Bluffton, Megan (David) Kilander of Warren, Daughter-in-Love: Dawn (fiance’, Tim McEntee) Hiester of Fort Wayne, Grandchildren: Carley (fiance', Anthony Woodruff) Marcum of Bloomington, Jared Marcum of Bluffton, Bryce Kilander of Warren, Emily Hiester of Fort Wayne and Adam Hiester of Fort Wayne, Step-Grandsons: Casey Marcum of Bloomington, Jesse (fiance’ Theresa Keith) Marcum of Greenwood, Great grandchildren: Kaelyn, Collin and Alanna Marcum. Sisters: Saundra (Gary) Conner of Missouri, Bonnie (Richard) Baumgartner of Warren, Sally Norman of Bluffton, Brother: Danny (Connie) Davison of Myrtle Beach, SC. Kay was preceded in death by her parents, Son, Michael Hiester and Step-Grandson, Kyle Marcum. Funeral Services will be held at 2:00 p.m. Monday, June 15, 2015 at the Thoma/Rich, Lemler Funeral Home. Dave Schultz will officiate. Calling hours are 1:00 p.m. to 7:00 p.m. Sunday, June 14, 2015 at the Funeral Home and one hour prior to the service on Monday. Burial will follow at Garden of the Chimes in Elm Grove Cemetery, Bluffton. Preferred memorials are to Bluffton Cemeteries Perpetual Care Flag Pole Fund. Funeral arrangements have been entrusted to the care of the Thoma/Rich, Lemler Funeral Home. Friends may send online condolences to the family at www.thomarich.com.

The family of Kay Sue Hiester created this Life Tributes page to make it easy to share your memories.

Send flowers to the Hiester family.