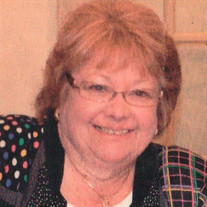 Karen I. Griffin, age 69, passed away on Thursday, June 18, 2015. Born June 21, 1945 in Bluffton, Indiana to the late Lee and Irene Tonner Wittwer. She joins her husband Kenneth H. “Kim” Griffin, who passed away July 29, 2013; and her brother Larry Wittwer She was a graduated of Lancaster High School in the class of 1963. Karen and Kim were members of Powell United Methodist Church, where Karen was the Preschool Director and Teacher, a title she held dear. She enjoyed a busy home; filled with people, love, laughter and good food. Her kindness, generosity, and flare for cooking were legendary. A loving wife, mom, grandma, sister, aunt and friend, Karen will be missed by all who knew her. To cherish her memory are her loving sons: Kedric (Allison) Griffin, Kylen Griffin and Kele Griffin; her grandchildren, Seraphim, Karina and Levi; nieces and nephews: Jerry Wittwer, Suzi Hahn, Alan Griffin, Cyndi Dawson, Lori Luke and Phillip Griffin, along with their families. Family will receive friends from 1:30 – 2:00 p.m., Sunday, June 28, 2015 at Powell United Methodist Church, 825 E. Olentangy Street, Powell, 43065 where her Memorial Service will follow at 2:00 pm, that afternoon. Memorial contributions may be made, in her name, to the Powell United Methodist Church Preschool. Burial will take place at a later time at Horeb Cemetery in Uniondale. Local arrangements have been entrusted to the care of the Thoma/Rich, Lemler Funeral Home in Bluffton. Friends can send online condolences to the family at www.thomarich.com.

The family of Mrs. Karen Irene (Wittwer) Griffin created this Life Tributes page to make it easy to share your memories.