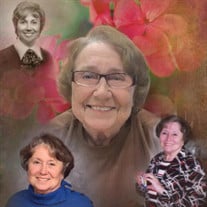 June V. Davis, 89 of Bluffton, passed away Saturday morning, September 18, 2021 at her home surrounded by her family. She was born on July 26, 1932 in Rugby, England to Edgar William & Violet Ellen (Barnes) Pope. She attended the Rugby College of Technology & Arts in England. She has been a resident of the United States since 1956. She worked as a travel consultant. She was a former member of the First Church of the Nazarene and currently First Reformed Church in Bluffton. June enjoyed cross-stitching, knitting and crafts, along with spending time with her family. On November 16, 1973 in Farmington Hills, MI, June and G. Douglas Davis were married. They moved to Bluffton in 1995. Together they shared 46 years of marriage, until he preceded her in death on December 5, 2019. June is survived by two daughters, Joanne D. Schroeder and Julie A. Foxx both of Bluffton, and a stepson, M. Bradley (Brenda) Davis of Fort Wayne. She was a sweet nannie to six grandchildren; Jacob (Andrea) Foxx, Laura (Andrew) Richardson, Patrick (Anna) Davis, Jason (Karena) Schroeder, Ian (Courtney) Schroeder and Devin (Lindsay) Schroeder, along with ten great-grandchildren. She is preceded in death by her parents, her husband, Doug, two brothers William George Pope and Maurice Edgar Pope. A service to celebrate June’s life will be held at 4 P.M. on Saturday, Sept. 25, 2021 at the Thoma/Rich, Lemler Funeral Home in Bluffton with Dr. Bryson “Gene” Bell officiating. Friends are encouraged to visit with the family from 2 P.M. to 4 P.M. on Saturday, prior to the service. Memorials may be made to Friends Who Care Cancer Relief Foundation, First Reformed Church or Visiting Nurse & Hospice. Inurnment will take place at Covington Memorial Gardens in Fort Wayne at a later date. Funeral arrangements have been entrusted to the care of the Thoma/Rich, Lemler Funeral Home in Bluffton. Friends can send online condolences to the family at www.thomarich.com.

June V. Davis, 89 of Bluffton, passed away Saturday morning, September 18, 2021 at her home surrounded by her family. She was born on July 26, 1932 in Rugby, England to Edgar William & Violet Ellen (Barnes) Pope. She attended the Rugby College... View Obituary & Service Information

The family of June V. Davis created this Life Tributes page to make it easy to share your memories.