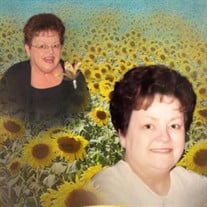 Joyce A. Hambrock, 75, of Bluffton passed away on Friday afternoon, October 19, 2018, at Bluffton Regional Medical Center Joyce was born on March 24, 1943 in Muncie, Indiana to Homer Howard & Florence Mae (Bowie) Davis. Joyce was a licensed cosmetologist since 1970, and manager of Richards Restaurant and City Limits Restaurant in Bluffton. She was an active volunteer for the American Cancer Society of Northeast Indiana. Joyce was a member of the Liberty Center Baptist Church. On November 1, 1985, Joyce married William “Bill” H. Hambrock. He preceded her in death on April 28, 2016. Joyce is survived by her children: Jody (George) Banter of Wolcottville, IN, Bradley (Tonya) Bryant of Bluffton, Tim Bryant of Ossian, along with 2 step-sons; James Michael “Mike” (Becky) Hambrock of Fort Wayne, John (Anne) Hambrock of Kenosha, WI, and with 20 Grandchildren and 24 Great Grandchildren. She is also survived by a brother, Howard “Sonny” Davis of Muncie, Indiana. Joyce is preceded in death by her parents, husband Bill and two brothers: Mike & Jerry Davis and a step-son, Joel Hambrock. A visitation will be held at the Thoma/Rich, Lemler Funeral Home 308 W. Washington St. Bluffton on Tuesday from 10 to 12 Noon, prior to the service. A funeral service will take place at 12 Noon on Tuesday (October 23, 2018) at the funeral Home with Pastor Aaron Westfall officiating. Burial will follow in the Fairview Cemetery. Memorials may be made to Liberty Center Baptist Church or Friends Who Care Cancer Relief Foundation. Funeral arrangements have been entrusted to the care of the Thoma/Rich, Lemler Funeral Home in Bluffton. Friends can send online condolences to the family at www.thomarich.com

The family of Joyce A Hambrock created this Life Tributes page to make it easy to share your memories.

Joyce A. Hambrock, 75, of Bluffton passed away on Friday afternoon,...

Send flowers to the Hambrock family.