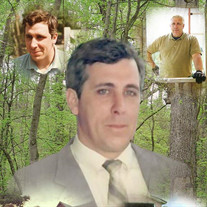 John E. Van Gordon, 63, of Keystone, passed away on Friday evening, May 4, 2018, at Bluffton Regional Medical Center. John was born on December 22, 1954 in Hartford City, Indiana to Arlo Edgar & Dorothy I. (Swim) Van Gordon. He graduated from Blackford High School in 1973. It was at Purdue that John and Toni L. (Kidder) first met. They were married on June 23, 1979 in Fort Wayne, she preceded him in death on March 31, 2018. John was a member of the Local Christian Assembly, NY. He served as a deacon for many years and served as the local elder for Bluffton. He worked at Star Homes in Fort Wayne, was a general contractor for many years and retired from Peyton’s Northern in Bluffton. John was an avid vegetable gardener and enjoyed sharing the produce with all he knew. He was always working with his hands, solving puzzles and reading. Most of all, he loved the Lord and would express that with all those he met. Survivors include two children; Rachel (Bill) Maggard of Bluffton and Sam (Cheryl) Van Gordon of Frankfort along with four grandchildren; Benjamin, Alexander, Emily Maggard and Harper Roe. John is also survived by his siblings; Esther (O’Dell) Lakes of Carmel, Joy (Dave) Bellinski of Muncie, David (Cindy) Van Gordon of Hartford City, Nancy (Michael) Lager of Williamsburg, VA. and Mike Van Gordon of Hartford City. He is preceded in death by his parents and a sister Sharon Fry. Funeral services will be held at 1 P.M. on Saturday (May 12th) at the Thoma/Rich, Lemler Funeral Home in Bluffton. Burial will follow at the Hartford City Cemetery. Calling hours will be held on Friday from 4 to 8 p.m. at the funeral home. Memorials may be made to the Wells County Public Library. Memorials may be made during visitation or service at the funeral home or mailed to the funeral home at Thoma/Rich, Lemler 308 West Washington Street, Bluffton, Indiana 467614. Funeral arrangements have been entrusted to the care of the Thoma/Rich, Lemler Funeral Home in Bluffton. Friends can send online condolences to the family at www.thomarich.com.

The family of John E. Van Gordon created this Life Tributes page to make it easy to share your memories.