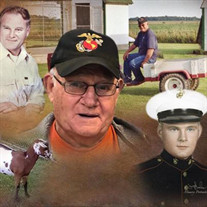 John R. Herrick, 83 of Ossian, IN passed away at his home on Sunday, July 12, 2020 with many of his family members by his side. Farmer John was born August 31, 1936 in Bluffton, IN to Othal D. and Charlotte J. (Mossburg) Herrick. He lived in Wells County all his life. John served in the U.S. Marine Corp from 1958 to 1961. He worked at Corning Glass in Bluffton, IN and then at General Motors (Fisher Body) in Marion, IN until his retirement in 2001. Farmer John and Karen (Helms) Herrick met in 1976 and were married on December 27, 1984 in Wells County, IN. They have been together for 44 years. Farmer enjoyed being in the woods. He spent his time doing work with his backhoe and clearing trails. He also enjoyed raising and showing Nigerian Dwarf dairy goats for 15 years. Farmer and Karen met many different families through attending goat shows that they considered to be family. Farmer is survived by his wife, Karen, daughters Nancy (Jody) Bowman of Phoenix, AZ, Amy (Rob) Seewald of Etna Green, IN and son Daniel (Teri) Moon of Uniondale, IN. Along with grandchildren Beth (Brad) Troyer of Goshen, IN, Brittany (Matt) Ely of Wakarusa, IN, Anna Seewald of Etna Green, IN, Lisa Bowman of Atlanta, GA, Hannah Bowman of Phoenix, AZ, Seth Moon of Markle, IN, Kody Moon of Markle IN, Dalton (Logan) Warren of Fort Wayne, IN, Karlee Warren of Fort Wayne, IN, Mitch Warren of Fort Wayne, IN, and two great grandchildren Braxton and Bailey Troyer of Goshen, IN and several nieces, nephews and in-laws. John was preceded in death by his parents, two sisters, Barbara Meyer and Bonnie Hall and a nephew, Jeff Meyer. The safety of the family and all visitors are our utmost priority. For everyone’s safety, we ask that you practice social distancing and masks are optional during your visit. We appreciate your cooperation and patience. Visitation will be held on Friday, July 17, 2020 from 4 to 8 P.M. at the Thoma/Rich, Lemler Funeral Home in Bluffton, IN. Services will be held at 10 A.M. on Saturday, July 18, 2020 at the funeral home with calling for one hour prior to the service. John’s son-in-law, Rev. Rob Seewald will officiate the service. Burial will take place at Horeb Cemetery in Uniondale, IN at a later date. In lieu of flowers, memorials may be made to Visiting Nurse Foundation, 5910 Homestead Road, Fort Wayne, IN 46814. Funeral arrangements have been entrusted to the care of the Thoma/Rich, Lemler Funeral Home in Bluffton. Friends can send online condolences to the family at www.thomarich.com.

John R. Herrick, 83 of Ossian, IN passed away at his home on Sunday, July 12, 2020 with many of his family members by his side. Farmer John was born August 31, 1936 in Bluffton, IN to Othal D. and Charlotte J. (Mossburg) Herrick. He lived in... View Obituary & Service Information

The family of John R. "Farmer" Herrick created this Life Tributes page to make it easy to share your memories.

Send flowers to the Herrick family.