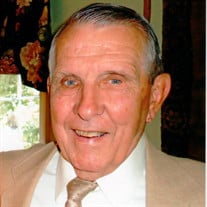 John F. “Jack” Cross, 81, a renowned Bluffton teacher, coach and school administrator, passed away unexpectedly Sunday, April 12, 2015 at his residence in Bluffton. Born on November 17, 1933 in Rushville, Indiana to Tracy G. and Lena (Beley) Cross. Jack graduated from Rushville High School in 1951 and earned B.S. and Masters degrees in education from Ball State University. Jack served in the U.S. Army from 1955 to 1957 and then began a career in education which spanned 40 years, including 34 years in the Bluffton-Harrison school district. On August 4, 1956 in Delphi, Indiana, Jack married Judith Hamling, who preceded him in death on February 3, 2015. After initial teaching and coaching stints at Pendleton High School and Dunkirk High School, Jack came to Bluffton in 1962 as a teacher and head basketball coach. He was the head Tiger basketball coach for 10 years, becoming the winningest coach in school history and posting an overall record of 143 victories and 88 losses for a winning average of .618. His Tiger basketball teams won five sectional championships, five holiday tournament titles and a conference championship in 1969. Two of his sectional champion teams advanced to the regional finals. He also coached cross country and baseball. Jack served as an assistant principal and guidance counselor in the B-H school system before assuming the role of athletic director in 1980, a position which he held until his retirement in 1996. In addition to his exemplary capabilities as a teacher, coach and administrator, Jack was an outstanding all-around athlete in his younger days at Rushville and Ball State, participating in basketball, football and track and field. In March of 2014 he was inducted into the Indiana Basketball Hall of Fame for his coaching and playing achievements. In February of 2011, Jack was inducted into the Bluffton Tiger Athletic Hall of Fame and in 1980, he was inducted into the Ball State Athletic Hall of Fame. He was a four-year member of the Ball State varsity basketball team and also played football for the Cardinals. Jack also was previously inducted into the Rushville High School Athletic Hall of Fame. Jack was an avid golfer and had the rare distinction of scoring a hole-in-one on all of the par-three holes at Timber Ridge Golf Club. He was a member of the Timber Ridge Golf Club and Bluffton Elks Lodge. Surviving are a daughter, Terri Ann (Kevin) Bollman of Fort Wayne and a son, Tracy Cross of Fort Wayne, along with two grandchildren, Emily and Jacob Bollman. Also surviving is a sister Jeanne Greer of Grand Rapids, Michigan and several nieces and nephews. He was preceded in death by his grandparents, Chester and Carrie Cross. A service to celebrate Jack’s life will be held at 11 a.m. on Friday, April 17 at the Thoma/Rich, Lemler Funeral Home in Bluffton with Life Celebrant Jeff Lemler and Tony Garton officiating. Calling hours will be held from 12 noon to 8 p.m. on Thursday, April 16 and for one hour prior to the service on Friday. Burial will take place at Elm Grove Cemetery. Preferred memorials are to the Bluffton Athletic Department through the funeral home. Funeral arrangements have been entrusted to the care of Thoma/Rich, Lemler Funeral Home. Friends can send online condolences to the family at www.thomarich.com

The family of John F. "Jack" Cross created this Life Tributes page to make it easy to share your memories.

Send flowers to the Cross family.