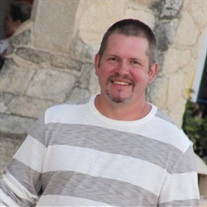 John D. Buskirk, 49, of Bluffton passed away Thursday afternoon, August 17, 2017. He was born on April 23, 1968 in Fort Wayne to Marvin D. Buskirk & Ann (Schlaudraff) Wenger. He graduated from Homestead High School in 1986, and Purdue University with a degree in Agricultural Engineering. He worked as an engineer at Tuthill Corp., in Fort Wayne, A.T. Ferrell Co., in Bluffton, and was the former owner / operator of Buskirk Engineering in Ossian. He attended Life Community Church and was drawn to mission work in India and Africa. John and Teresa (Grube) Buskirk were married at Nine United Methodist Church, Fort Wayne, September 21, 1991. He is survived by his wife Teresa of Bluffton, his father Marvin (Edna) Buskirk of Fort Wayne, mother Ann (Don) Wenger of Fort Wayne, and children: Luke Buskirk of Darmstadt, Germany, Kohl Buskirk and Nevaeh Buskirk, both of Bluffton along with siblings: Dan (Jennifer) Buskirk of Mason, MI and Desiree Buskirk of Fort Wayne. Visitation will be from 12 Noon to 6 p.m. on Sunday (August 20, 2017) at the Thoma/Rich, Lemler Funeral Home in Bluffton. The funeral service will take place at 10 a.m. on Monday at Life Community Church in Bluffton, with visitation one hour prior the service. Memorials may be made to the family. Funeral arrangements have been entrusted to the care of the Thoma/Rich, Lemler Funeral Home in Bluffton. Friends can send online condolences to the family at www.thomarich.com.

The family of John D Buskirk created this Life Tributes page to make it easy to share your memories.

Send flowers to the Buskirk family.