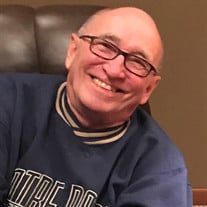 Joel T. Smekens, 74, a lifelong resident of Bluffton, passed away Saturday morning, March 10, 2018 at Lutheran Hospital in Fort Wayne. Born Sept. 5, 1943 to the late Clemen and Martha Smekens, he married Barbara Brickley Aug. 5, 1989 at the First Baptist Church in Bluffton; she survives. A 1961 graduate of Bluffton High School, he attended the Milo Bennett School of Linotype in English, Ind. After a brief stint at the Warsaw Times-Union, then-publisher Roger Swaim contacted him about an opening at The News-Banner. He began his career there May 23, 1963. Joe began covering local high school sports in the fall of 1968; he continued to work as a Linotype operator by day and a sports writer by night until the News-Banner converted to offset printing and moved to a new building on North Johnson Street. At that time he began full time work in the news and sports departments. He was named the newspaper’s sports editor in October 1977. When he suffered his first heart attack in April 1986, publisher Jim Barbieri felt moving him to the post of managing editor would be less stressful. He served in that capacity until his retirement on his 65th birthday in 2008, completing a truly remarkable 45-year career. He had also been a News-Banner carrier for 10 years, first helping his older brothers on their route when he was 9 and eventually taking over the route himself. After retirement, he worked part time at Thoma/Rich, Lemler Funeral Home. Joe was the recipient of many writing awards during his career from the UPI and the Hoosier State Press Association; in 1985 he was recognized by the Indiana Basketball Coaches Association for his outstanding coverage. In July 1986, he represented the family of Bluffton native Everett Scott for his induction into the Indiana Baseball Hall of Fame. Joe had led the effort to nominate Scott. At that ceremony, Joe met and interviewed national Hall of Fame Cincinnati Reds catcher Johnny Bench; he also had an opportunity during his career to interview NFL great Johnny Unitas. Joe was inducted into the Bluffton High School Athletic Hall of Fame in 2000, was honored as the Grand Marshall of his beloved Bluffton Street Fair in 2008, and was presented with a Distinguished Hoosier Award by Gov. Mitch Daniels upon his retirement. Joe served in the Indiana National Guard from 1964 to 1970. Joe attended St. Joseph Catholic Church in Bluffton; Joe and Barb attended the First Baptist Church in Bluffton. He was also a former member of the Bluffton Lions Club. Joe loved playing golf and was a regular with the Under the Tree Gang at Timber Ridge Golf Course in his retirement. His other hobbies were centered around his grandchildren’s sports and musical performances. He kept up with watching and enjoying Wells County high school sports after his retirement as well as reading. He continued to write stories and articles. In 2013, he published a book: “Window of Wells County — A Reporter’s Favorite Stories,” a collection of articles and columns from his career at The News-Banner. He was deeply appreciative and humbled by the response he received. In addition to his wife, he is survived by a daughter, Angie (Scott) Harris of Poneto; a son, Brady (Kristina) Smekens of Warren; three step-daughters, Denise (Tom) Oswalt of Bluffton, Julie Fetters of Kapolei, Hawaii, and Diane (Patrick {Chip}) McArdle of Shawnee, Kan.; two brothers, John Smekens of Troy, Ohio and Mike Smekens of Bluffton; two sisters, Susie (Gary) Studebaker of Tampa, Fla. and Jane (Greg) Waters of Bluffton; 13 grandchildren, Kayla (Bryant) Ponchot, Janette (Kurt) Funk, Leah (Brandon) Huggins, Joseph (Sarah) McArdle, Thomas (Paula) McArdle, Paul McArdle, Katie (Joey) Orozco, Chase (Mallory) Harris, Chandler Harris, Grant Harris, Sophia Smekens, Andrew Smekens, and Sydney Smekens; and seven great-grandchildren, Kyler Funk, Camden Funk, Brecken Ponchot, Mia Huggins, Molly McArdle, Emmy McArdle and William McArdle. Services will be held Wed., March 14 at 10:30 a.m. at the First Baptist Church. Visitation hours are Monday from 5 to 8 p.m., Tuesday from noon to 8 p.m. at Thoma/Rich, Lemler Funeral Home, and Wednesday for one hour prior to the services at the church. Pastor Les Cantrell and Jeff Lemler will officiate. Burial will be in Elm Grove Cemetery with Catholic Graveside Rites conducted by Msgr. Pius N. Ilechukwu. There will also be graveside military honors by the American Legion Post 111 Color Guard and the U.S. Army Honor Guard. Preferred memorials are to the Bluffton, Southern Wells and Norwell Athletic Departments. Friends can send online condolences to the family at www.thomarich.com.

The family of Joel T Smekens created this Life Tributes page to make it easy to share your memories.

Send flowers to the Smekens family.