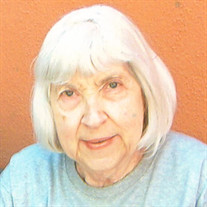 JOANNE (THOMPSON) GARVER, died Monday, Nov. 24, 2019, in Tucson of old age. She was a retired antiques collector, former financial analyst, and a daily devotee of crossword puzzles. Born in Nogales, Ariz., on Nov. 30, 1931, she would have been 88 in six more days. Her parents, realty owner Ralph E. Thompson and Leona Barwiler, were visiting Karmel Korn, a small confectionary shop they owned in Nogales, when Joanne became a border baby. In April 1934, Joanne's earliest memories were about the Tucson kidnapping of first grader June Robles. After 19 days, the governor received general directions for finding June in the desert miles east of the city. The county attorney and an uncle searched for hours and were about to give up when they found sheet iron covering a hole. Inside, chained to a stake, June was dirty but alive. Joanne for years would have nightmares about finding herself in a hole in the desert miles from home. Later in 1934, nightmares became reality with the death of her father from tuberculosis. Her mother remained in Tucson as a registered nurse at the Desert Sanatorium, but sent Joanne to Wells County to be raised by her maternal grandmother, Elizabeth Barwiler, and an aunt, Margaret Barwiler, on a farm near the Wabash River. Her grandfather, Joseph Barwiler, was the first licensed school bus driver in the state. On arrival in Indiana, she was at a loss, asking, "Where are the mountains?" At 12, Joanne and the Barwilers moved to Huntington, where Joanne graduated from Huntington Catholic High School. In 1951, she married Richard A. Garver, a journalist, academic, and CIA agent. Joanne earned a B.A. from the University of Montana in 1959, but the couple separated in 1961. Joanne moved to Princeton, N.J., with her adopted son Paul Tioux, a Lakota Sioux, and worked as a financial analyst for New Jersey Medicaid while volunteering for several charities. She returned to Tucson in 1991, living in restored old adobes in the Barrio Libre National Historic District on the south side of downtown. A parishioner of St. Kateri Tekakwitha Church, she admired pioneer Padre Francisco Eusebio Kino as well as Indian culture and heritage. She enjoyed visiting art museums, listening to classical music, gardening, and travel, but her great love was her cats. Survivors besides her son Paul, a master carpenter and fine arts artisan in Santa Fe, include granddaughters Bay Povi and Summer Tioux; step-grandchildren Karla Reynolds and Rainsound Tioux; cousins Walter Hartman of Peoria, Ariz., and Viola Thompson of Golconda, Ill.; and other cousins in Fort Wayne and Rochester, Minn. The Rev. Thomas Shoemaker, pastor of St. Charles Borromeo Catholic Church at 4916 Trier Road in Fort Wayne, is to celebrate a memorial Mass at the church at 10 a.m. on Saturday, Dec. 29, 2019. Burial is to follow in the Fairview Cemetery in Bluffton near the Barwiler farm. Memorials may be made to the Fort Wayne Humane Society or the Fort Wayne Philharmonic.

JOANNE (THOMPSON) GARVER, died Monday, Nov. 24, 2019, in Tucson of old age. She was a retired antiques collector, former financial analyst, and a daily devotee of crossword puzzles. Born in Nogales, Ariz., on Nov. 30, 1931, she would have been... View Obituary & Service Information

The family of Joanne Garver created this Life Tributes page to make it easy to share your memories.

Send flowers to the Garver family.