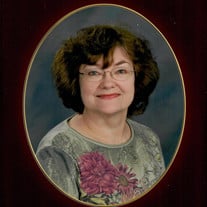 Joan Garrison, 77 of Bluffton, passed away on Saturday morning, February 8, 2020, at St. Joseph’s Hospital in Fort Wayne. Joan was born on June 8, 1942 in Bluffton to Paul Robert & Martha Edna (Biberstine) Garrison. A 1960 graduate of Bluffton, Joan furthered her education at International Business College in Fort Wayne. She worked in the office of Franklin Electric in Bluffton for her entire working career. She was a member of the Bluffton First Church of the Nazarene and had a talent for art. Joan enjoyed making sculptures when she was young and was gifted with oil paintings and enjoyed painting landscapes. Joan is survived by 11 nieces and nephews; Barbara Garrison, Donna Smith, Robert Garrison, Cynthia Phillips, Debbie Glenn, Beverly Highlen, Linda Broman, Sheila Meyer, Terry Herman, Tony Herman and Julie Etchison. She is preceded in death by her parents along with two sisters, Doris Stewart, Carolyn Herman and three brothers, Junior, Lloyd and Larry Garrison and 4 nieces and nephews. A service to celebrate Joan’s life will be held at 4 P.M. on Saturday (Feb. 15, 2020) at the Thoma/Rich, Lemler Funeral Home in Bluffton. Burial will follow at Six Mile Cemetery in Bluffton. Calling hours will be held from 1 P.M. to 4 P.M on Saturday, prior to the service at the funeral home. Memorials may be made in Joan’s memory to Helping Hands Crisis Pregnancy Center in Bluffton. Funeral arrangements have been entrusted to the care of the Thoma/Rich, Lemler Funeral Home in Bluffton. Friends can send online condolences to the family at www.thomarich.com.

The family of Joan Garrison created this Life Tributes page to make it easy to share your memories.

Joan Garrison, 77 of Bluffton, passed away on Saturday morning,...

Send flowers to the Garrison family.