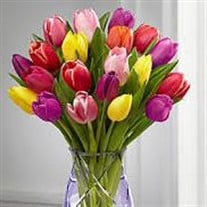 Joan “Joanie” Edris Bossert passed away March 27, 2019, from complications related to acute myeloid leukemia (AML). Joanie was born and raised in Bluffton, Indiana. She attended Indiana University in Bloomington, Indiana, where she earned a degree in Elementary Education and was an active member of Kappa Alpha Theta sorority. At IU, she met her husband, John Keith Bossert, from Liberty, Indiana, and they married in 1955. Shortly following their wedding, they relocated to the American Air Force Base at Kisarazu, near Tokyo, Japan, where Keith was stationed following his ROTC training at Indiana. While in Japan, Joanie taught first grade on the Kisarazu Base. Joanie and Keith moved to Liberty, Indiana, in 1961, and Joanie continued to teach, first in Richmond and then at Liberty Elementary. In 1961, Keith was diagnosed with multiple sclerosis (MS), and as his condition worsened and he could no longer work, Joanie pursued her Masters Degree in Education at Miami of Ohio. She taught at Liberty Elementary until her retirement in 1988 and often remarked that her greatest delight was “to see the lights go on when her students learned to read.” Joanie was an accomplished seamstress, quilter, and knitter, and she enjoyed attending quilting classes immensely. She was an avid sports fan and enjoyed watching her grandchildren at their various sporting events--She rarely missed seeing them play. Joanie always wore a smile and enjoyed a good laugh. Her many lifelong friendships spanned from high school to college and beyond. Joanie was kind, selfless, and genuinely interested in others. Above all, she was devoted to her family and Keith. She cared for Keith until his death in 2008, and despite the challenges MS presented, Joanie and Keith enjoyed a very happy marriage--They particularly enjoyed watching sports coverage of the Chicago Bears, Cincinnati Reds, and their beloved Indiana Hoosiers. Joanie is survived by her son, John (Tricia) of Issaquah, WA, her daughter, Susan (Charlie) Kuhn of Glenview, IL, three grandchildren, Allison Bossert, Carolyn, and Charlie Kuhn, Jr., a nephew and two nieces. A service to celebrate and remember Joanie will be held at 12 Noon on Saturday (August 10, 2019) at the Thoma/Rich, Lemler Funeral Home in Bluffton. Rev. Duane Modlin will officiate. Burial will follow at Elm Grove Cemetery in Bluffton. In lieu of flowers, donations in memory of Joanie may be made to the Leukemia and Lymphoma Society, the National Multiple Sclerosis Society or to the charity of your choice. Funeral arrangements have been entrusted to the care of the Thoma/Rich, Lemler Funeral Home in Bluffton. Friends can send online condolences to the family at www.thomarich.com.

The family of Joan (Edris) Bossert created this Life Tributes page to make it easy to share your memories.