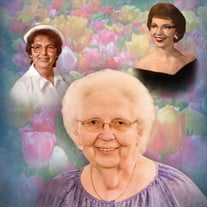 Jo-Ann Babel, 82 of Bluffton, passed away on Friday evening, July 23, 2021, at Parkview Regional Medical Center in Fort Wayne. Jo-Ann was born on October 18, 1938 in Steubenville, Ohio to Silas C. “Charles” & Cassie H. “Hazel” (Guy) Stilwell. She graduated from Jefferson Union High School in Richmond, Ohio in 1955 and from Jefferson Tech. College in 1983, where she earned her degree as an LPN. Jo-Ann owned and operated Red & Jo’s Bar with her husband, John R. “Red” Walker, Sr. for 6 years. She worked as an LPN at a hospital in Arkansas and retired from Martha Manor Nursing Home in Steubenville. After she retired, she moved to Bluffton in 2005, and was an active member of the Epworth United Methodist Church in Bluffton, where Jo-Ann served as the financial secretary and was a member of United Methodist Women. Survivors include two sons; John R. (Brenda) Walker, Jr. of Carmel and James R. (Kristy) Walker of Bluffton and two stepsons; Henry D. (Karen) Babel of Tucson, AZ. And Douglas L. (Susan) Babel of Beebe, AR, daughter in law; Dru (Hank) Fleishour of Steubenville, OH. She is also survived by her grandchildren; Kimberly S. (Christopher) Leirer, Erin M. Walker, Logan J. Walker and Reese R. Walker and step-grandchildren; Derek Noble, Alyssa Noble, Karston Boone, Tina Babel, Hank Babel and great-granddaughters, Kiley Babel and Caroline Leirer. Jo-Ann is preceded in death by her parents, her husbands; John R. Walker Sr, Henry G. Babel, Jr. and a brother, Raymond G. Stilwell. A funeral service will be held at 1 P.M. on Saturday (July 31, 2021) at the Thoma/Rich, Lemler Funeral Home in Bluffton with Tony Garton officiating. Burial will take place at Center Chapel Cemetery in Steubenville, Ohio at a later date to be determined by family. Visitation will be from 10 A.M. to 1 P.M. on Saturday, prior to the service. Memorials may be made in Jo-Ann’s memory to the Ossian Health & Rehab. Transportation Fund. Funeral arrangements have been entrusted to the care of the Thoma/Rich, Lemler Funeral Home in Bluffton. Friends can send online condolences to the family at www.thomarich.com.

The family of Jo-Ann Babel created this Life Tributes page to make it easy to share your memories.

Jo-Ann Babel, 82 of Bluffton, passed away on Friday evening,...

Send flowers to the Babel family.