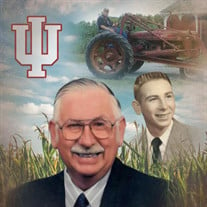 Jimmy Lee “Jim” Thompson, 81 of Liberty Center, Indiana passed away on Friday morning, April 8, 2022, at Ossian Health & Rehab Center. Jim was born on November 9, 1940 in Bluffton to John Ware & Maxine (Markley) Thompson. He graduated from Liberty Center High School in 1958. He served his country in the United States Army from 1963 to 1965 and continued to serve in the National Guard until 1967. Jim was an active member for many years of Boehmer United Methodist Church where he held many offices. He was also a member of the American Legion Post #111 of Bluffton. Jim retired as a rural letter carrier for Liberty Center, retiring in 2002 after 34 years of service. He lived his entire life on the Thompson Homestead farm and was dedicated to caring for and farming for many years. He always looked forward to going hunting and fishing! Even though he never had children of his own, Jim was always involved in every aspect of the extended families’ lives. He never knew a stranger and often greet others with a slight smile and “Howdy”. After he retired from the postal service, Jim enjoyed working for many years with Clyde Snow of Warren roasting hogs for many family gatherings, parties and community event. Survivors include his nieces/nephews; Jeff (Tonya) Thompson of Pierceton, Jami (Tim) Prough, Jennifer (Chris) Earhart and Troy McAfee, all of Bluffton. He is also survived by great nieces/nephews; Derek (Lacey) Prough, Jobe Thompson, Shelby Earhart, Josh Thompson, Trevor Prough and Jaci Prough along with two great-great-nieces and a great-great-nephew; Jason Prough, Emily Prough & Piper Earhart and several cousins. He is preceded in death by his parents, two brothers: Bill Thompson and Richard E. “Dick” Thompson along with a sister, Joyce Ann McAfee. Visitation will be held from 4 P.M. to 7 P.M. on Tuesday, April 12, 2022 at the Thoma/Rich, Lemler Funeral Home in Bluffton and for one hour prior to the service. A funeral service will be held at 10:30 A.M. on Wednesday, April 13, 2022 the Thoma/Rich, Lemler Funeral Home. Burial will follow at Mossburg Cemetery in Liberty Center, Indiana with military honors by the United State Army Honor Guard and the American Legion Post #111 Honor Guard. Memorials may be made to the Boehmer United Methodist Church or the memorial of the donor’s choice. Funeral arrangements have been entrusted to the care of the Thoma/Rich, Lemler Funeral Home in Bluffton. Friends can send online condolences to the family at www.thomarich.com.

The family of Jimmy Lee "Jim" Thompson created this Life Tributes page to make it easy to share your memories.