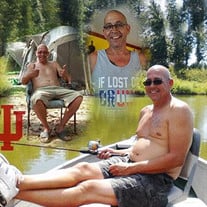 Jim Pennington, 58, of Linn Grove passed away on Monday, August 5, 2019 at Lutheran Hospital in Fort Wayne. Jim was born on June 28, 1961 in Bluffton, Indiana to Carl E. & Gladys N. (Lee) Pennington. He attended South Adams High School and worked maintenance for FCC-Adams for the last 8 years. Jim enjoyed IU basketball, golfing, fishing watching the Raiders and camping with his family. Jim and Erin (Gallmeyer) were married on July 11, 2015 at the Ouabache State Park in Bluffton. Survivors include his wife, Erin of Linn Grove, along with eight children; Taya Patch, Taren Bauman, Casey (John) Smith, Jimmy (April) Pennington, Zach Pennington, Taylea (Rodney) McKean, Austin Pennington and Madison Pennington, along with three bonus children; Miles Ford, Marcus Ford and Raven Ford. He is also survived by 22 grandchildren. Jim is also survived by his mother Gladys of Geneva and four siblings, Matt W. Pennington, Carl Leon Pennington both of Geneva, Rex A. Pennington of Monroe and Mary A. Pennington of Bryant. Jim is preceded in death by his father and two brothers, Bill and Scott Pennington, along with one grandchild, Darius. Calling hours will be held from 2 P.M. to 8 P.M. on Friday and from 4 P.M. to 6 P.M. on Saturday at the Thoma/Rich, Lemler Funeral Home in Bluffton A service to celebrate Jim’s life will take place at 6 P.M. on Saturday (August 10, 2019) at the funeral home. Pastor Wilbur Taylor will officiate. Burial will follow at Stahl cemetery. As Jim would prefer, the family prefers casual dress or wear your favorite sports clothing for his visitation and service. Memorials may be made to the family. Funeral arrangements have been entrusted to the Thoma/Rich, Lemler Funeral Home in Bluffton. Friends can send online condolences to the family at www.thomarich.com.

The family of Jim L. Pennington created this Life Tributes page to make it easy to share your memories.

Jim Pennington, 58, of Linn Grove passed away on Monday, August...

Send flowers to the Pennington family.