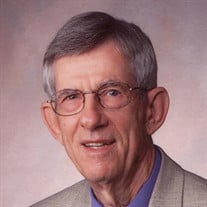 Jerry A. Crandall, 88 of Bluffton passed away on Wednesday morning, April 20, 2022, at Ossian Health & Rehabilitation Center. He was born on July 8, 1933 in Bluffton to Marvin W. & Nora A. (Neff) Crandall. A 1951 graduate of Bluffton High School, Jerry attended Indiana Institute of Technology in Fort Wayne. Jerry served our country in the United States Army during the Korean Conflict between 1953 and 1955. Jerry worked at the State Park (Ouabache) while he was in high school, at the News-Banner, Kresge Warehouse and retired as a project engineer for Navistar in Fort Wayne after 36 years of service. Jerry was a member of the First Reformed Church, Wells County Historical Society, Bluffton Genealogy Society and volunteered at the Wells County Library and Bargain Hut for many years. On Christmas Eve in 1953, Jerry and Margaret A. (Toms) were married. Survivors include his wife of 69 years, Margaret of Bluffton and a daughter, Cheryl (Richard) Sills of Bluffton, along with a sister, Rebecca Steury of Bluffton. Jerry was a loving grandpa to 3 grandchildren: Jamie (Mark) Hillhouse of Greenwood, Eric (Emily) Sills of Noblesville and Laura (Abu Sesay) Sills of Fort Wayne, and 6 great-grandchildren: Aidan Patrick Sills, Hailey Lynn Hillhouse, Cole Michael Hillhouse, Caleb Parker Hillhouse, Nicholas Scott Sills and Claire Ann Sills. Jerry is preceded in death by his parents and a brother, William K. Crandall. A service to celebrate Jerry’s life will be held at a later date. Memorials may be made to the First Reformed Church or Heartland Hospice. Funeral arrangements have been entrusted to the care of the Thoma/Rich, Lemler Funeral Home in Bluffton. Friends can send online condolences to the Crandall family at www.thomarich.com.

Jerry A. Crandall, 88 of Bluffton passed away on Wednesday morning, April 20, 2022, at Ossian Health & Rehabilitation Center. He was born on July 8, 1933 in Bluffton to Marvin W. & Nora A. (Neff) Crandall. A 1951 graduate of Bluffton High... View Obituary & Service Information

The family of Jerry A. Crandall created this Life Tributes page to make it easy to share your memories.

Jerry A. Crandall, 88 of Bluffton passed away on Wednesday morning,...

Send flowers to the Crandall family.