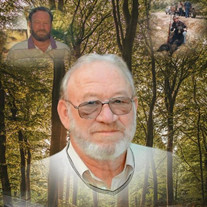 Jerome “Jerry” D. Christianson, 82 of Bluffton, passed away on Sunday morning, March 7, 2021, at Swiss Village in Berne. Jerry was born on August 9, 1938 in Eagle Bend, MN. to George & Inez (Oman) Christianson. A 1956 graduate of Bluffton High School, Jerry was a truck driver for over 45 years and drove for Food Marketing from 1956 to 2001. He was also the owner of Frontier Antiques and Guns in Bluffton for over 10 years. Jerry was a member of the Bluffton Elk’s where he served as a trustee for many years, American Legion Post #111 of Bluffton and the Bluffton Moose Lodge. He enjoyed serving as the manager of the Bluffton Free Street Fair for over 10 years and was instrumental in building the Interurban Express Streetcar for the 100th Bluffton Free Street Fair! He enjoyed collecting antiques and antique cars and was a talented artist and model ship builder. He had a love for cooking for his family and others. On September 9, 1961 in Bluffton, Jerry married Patricia “Patty” (Spaid). They shared 54 years together, and she preceded him in death on October 27, 2015. Survivors include a son Terry Christianson and a daughter Vicki (Steve) Cale, both of Bluffton. He is also survived by a daughter, Linda Sechrist of Lafayette. He was a loving grandpa to three grandchildren; Kaylee (Brian) Riesen, Cameron Gerber and Ryland Christianson a great-grandson; Jace Andrews and great-granddaughter; Ellie Jane and three step-grandchildren; Ryan Cale, Matt Cale and Abby Hissong along with six step-great-grandchildren. Jerry is also survived by a sister, Joanne Jackson of Ohio along with nieces and nephews. He is preceded in death by his parents, his wife Patty, a brother, Larry Christianson and a sister, Janice Schieferstein. A service to celebrate Jerry’s life will be held at 10:30 A.M. on Saturday, March 13, 2021, at the Thoma/Rich, Lemler Funeral Home in Bluffton. Burial will follow at Six Mile Cemetery in Bluffton with military honors by the United State Army Honor Guard and the American Legion Post #111 of Bluffton. Calling hours will be held from 2 P.M. to 7 P.M. on Friday at the funeral home and for one hour prior to the service on Saturday. An Elk’s memorial service will be held at 7 P.M. on Friday, at the conclusion of calling. Memorials may be made in Jerry’s memory to Bluffton Elk’s Lodge or Visiting Nurse Hospice. The safety of the family and all visitors is our utmost priority. For everyone’s safety, we ask that you practice social distancing. Masks are required for visitation and for the service. During the current guidelines, we are only allowed a limited number of people in the building at a time. We appreciate your cooperation and patience. Funeral arrangements have been entrusted to the care of the Thoma/Rich, Lemler Funeral Home. Online condolences may be sent to the family at www.thomarich.com.

The family of Jerome "Jerry" D. Christianson created this Life Tributes page to make it easy to share your memories.

Jerome “Jerry” D. Christianson, 82 of Bluffton, passed away on...

Send flowers to the Christianson family.