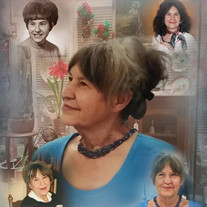 Jenelle (Holloway) Webb, 70, of Fort Wayne, Indiana passed away on Saturday morning, July 13, 2019 at Parkview Regional Medical Center in Fort Wayne. She was born on December 16, 1948 in Wells County to Joe D. & Martha Ferne (Starr) Holloway. A 1967 graduate from Southern Wells High School, Jenelle was active in the Wells County 4-H Program, Sunshine Program and National Honors Society. Jenelle owned and operated for over 22 years, Nature’s Corner Antique Mall in Fort Wayne. She was a coordinator of Antique’s in the Park and member of the Allen County Genealogy Association. She was formally the banquet manager for Don Hall’s Guest House for many years. Jenelle and Fred E. Webb married on June 7, 1991 in Lakeland, FL. and he survives. Survivors include her husband Fred of Fort Wayne along with children; Troy (Linda) Waters, Stephanie Waters and Jeremy Waters, all of Huntertown, Sunday (Keong) Sudharto of Sarasota, FL., Freddie (Angela) Webb of Leo, Paul (Alishia) Webb of Fort Wayne and Ryan (Dondra) Webb of Fort Wayne along with 15 grandchildren. Jenelle is also survived by her brothers & sisters; Sally Jo Tinkel of Fort Wayne, Dan (Rose) Anderson of Bluffton, Jill (Kenneth) Ellenberger of Bluffton, Jerri (Don) Lehman of Craigville, Jon (Carla) Holloway of Angola, Jeff Holloway of Huntington, Jody (Jodi) Holloway of Bluffton and Jay (Marie) Holloway of Cody, WY. and a brother-in-law Eric “Rick” Jarrett of Liberty Center. She is preceded in death by her parents along with two brothers, Jack Holloway & Jim Holloway and a sister, Sara Jane Jarrett. Calling Hours will be held 2 p.m. to 8 p.m. on Thursday (July 18, 2019) at the Thoma/Rich, Lemler Funeral Home in Bluffton, and for one hour prior to the service. A service to celebrate Jenelle’s life will be held at 11:30 A.M. on Friday (July 19, 2019) at the funeral home with Jeff Lemler officiating. Burial will follow at Stahl Cemetery in rural Bluffton. Memorials may be made in Jenelle’s memory to Friends of the Ouabache State Park. Funeral arrangements have been entrusted to the care of the Thoma/Rich, Lemler Funeral Home in Bluffton. Friends can send online condolences to the family at www.thomarich.com.

The family of Jenelle Webb created this Life Tributes page to make it easy to share your memories.

Send flowers to the Webb family.