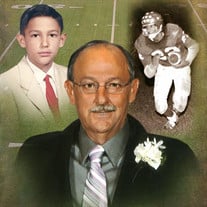 Jeffrey Allen Robles, 61, of Bluffton, died Tuesday, Jan. 24, 2017, at the University Nursing Center in Upland, Indiana. A lifelong resident of Wells County, he was born on April 21, 1955 in Bluffton to Alfred P. and Martha Louise (Sliger) Robles. He graduated from Bluffton High School in 1973 as one of the greatest football players in BHS history. His senior year on the Tiger football team, Jeff scored 20 touchdowns and set school records in scoring with 137 points and rushing, with 1,335 total yards. For his senior season, he totaled a record 2,065 yards in rushing, receiving and handling punts and kick-off returns. He also was an outstanding performer on Tiger basketball and track and field teams. In track and field, he was the first Tiger athlete to clear 12 feet 10 inches in the pole vault, setting a BHS school record in 1972. Jeff had a passion for football all of his life and was an avid Chicago Bears fan. He was a former assistant coach with Bluffton High School football teams. He also was a founder of the Wells County PeeWee Football League. He also was involved with coaching girls softball teams in the summer months. Jeff was employed at Corning Glass Works, including a period at a Corning plant in South Korea. He also was employed at Towne Air Freight and Rock Leasing. Jeff is survived by three daughters, Kayla (Bryant) Ponchot of Greenwood, Janette (Curt) Funk of Gas City, and Leah (Brandon) Huggins of Greenville, South Carolina. Also surviving are grandchildren Kyler and Camden Funk, Brecken Ponchot and Mia Huggins. Additional survivors are a sister Judy (Harold) Wheeler of Bluffton, and two brothers Michael (Carol) Robles of Hartford City and Anthony “Tony” (Camelia) Robles of Domestic. Also surviving is a sister-in-law, Mary Robles of Fort Wayne. Other survivors include numerous nieces and nephews. He was preceded in death by his parents and a brother, Dennis. Funeral services and calling will be on Friday, January 27, 2017 at Thoma/Rich Lemler Funeral Home. Calling will be from 12 noon to 5 p.m. The funeral service will begin at 5 p.m. with Pastor Tony Robles officiating. Burial will be at a later date at Six Mile Cemetery. Preferred memorials are to the Bluffton Athletic Boosters Club. Funeral services have been entrusted to the care of Thoma/Rich Lemler Funeral Home. Friends can send online condolences to the family at www.thomarich.com.

Jeffrey Allen Robles, 61, of Bluffton, died Tuesday, Jan. 24, 2017, at the University Nursing Center in Upland, Indiana. A lifelong resident of Wells County, he was born on April 21, 1955 in Bluffton to Alfred P. and Martha Louise (Sliger)... View Obituary & Service Information

The family of Jeffrey Allen Robles created this Life Tributes page to make it easy to share your memories.

Send flowers to the Robles family.