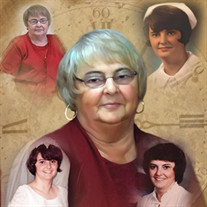 Jeannie Penrod Flowers, 71, of Bluffton, IN, passed away on Tuesday, December 1, 2020 at Lutheran Hospital in Fort Wayne, IN after a serious illness. A life-long resident of Bluffton, IN, she was born to Herschell and Wannetta (Maupin) Penrod on March 16, 1949. After graduating from Bluffton High School in 1967, Jeannie went on to earn her LPN license from the Parkview Methodist School Nursing in Fort Wayne in 1968. That same year, on December 21, she married Kenneth R. Flowers in Bluffton, IN. Her love and passion in caring for others was felt by many during her nursing career where she worked at Caylor-Nickel Hospital in multiple departments for 24 years. She then attended to the care of the elderly in various long-term care facilities in Bluffton, IN. Jeannie retired in 2015 but never let her nursing license expire “just in case” she would need to be of service. Jeannie was a selfless and loving wife, mother, grandmother, daughter, sister, aunt and friend to all those who knew her. She is survived by husband, Kenneth R. Flowers of Bluffton, a son, Daniel R. (Elizabeth) Flowers and a granddaughter, Anna D. Flowers, all of South Bend, her father, Herschell L. Penrod of Bluffton and brothers, Geoffrey Penrod of Columbia City, Boyd Penrod of Bluffton and Brian Penrod of Markle. Jeannie is preceded in death by her mother, Wannetta Penrod. Jeannie was always concerned about everyone’s health and safety, especially during this time. We are honoring that selfless love by having a private family service. Friends wishing to watch Jeannie’s service can do so from the safety of their home, utilizing a Zoom Meeting. You can login using the Zoom Meeting I.D. # 839 3804 0192 and you can login after 12:45 P.M. on Saturday, December 5, 2020. Private family burial will follow at Six Mile Cemetery in Bluffton. The family prefers memorials over flowers, and they can be made to the American Lung Association and should be mailed to the funeral home. Funeral arrangements have been entrusted to the care of the Thoma/Rich, Lemler Funeral Home in Bluffton. Friends wishing to send messages and memories of Jeannie to her family can do so at www.thomarich.com.

Jeannie Penrod Flowers, 71, of Bluffton, IN, passed away on Tuesday, December 1, 2020 at Lutheran Hospital in Fort Wayne, IN after a serious illness. A life-long resident of Bluffton, IN, she was born to Herschell and Wannetta (Maupin) Penrod... View Obituary & Service Information

The family of Jeannie W. Flowers created this Life Tributes page to make it easy to share your memories.

Jeannie Penrod Flowers, 71, of Bluffton, IN, passed away on Tuesday,...

Send flowers to the Flowers family.