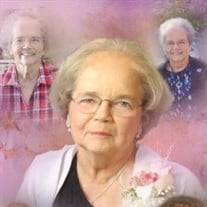 Janet L. Smith 82, of Bluffton, passed away Sunday evening February 23, 2020 at Ossian Health Care in Ossian. Janet was born July 16, 1937 in Bluffton to Lawrence Reaser and Nellie (Noble) Reaser-Dickason. Janet and James “Jim” Smith were married on April 7, 1956 in Petroleum, IN. A 1955 graduate of Petroleum High School, she worked at NFM Grain Elevator and Panhandle Eastern Pipeline. Janet served as a deputy in the Wells County Recorder’s office from 1985 to 1992. In 1993, Janet was elected as Wells County Recorder and held that position until 2001, where she continued to serve as a deputy in that office until she retired on August 2, 2002. Janet was a member of JT5 Homemakers Club and attended Petroleum United Methodist Church. She loved camping and most of all spending time with her family. Survivors include her husband of almost 64 years, Jim of Bluffton along with three sons; Randy (Lisa) Smith of Bluffton, Larry (Sarah) Smith of Bluffton, and Chris (Missy) Smith of Liberty Center and a daughter Heidi (Doug) Fear of Uniondale along with 17 grandchildren and 14 great-grandchildren. Janet was preceded in death by her parents and a brother, Jerry Reaser. Services for Janet will be at 10:30 am Friday, (Feb. 28, 2020) at Thoma/Rich, Lemler Funeral Home in Bluffton with Pastor Steve Bard officiating. Burial will follow in Stahl Cemetery in Wells County. Visitation will be from 4pm – 8pm Thursday, (Feb. 27, 2020) and for one hour prior to the service. Memorials may be made in Janet’s memory to the Petroleum United Methodist Church. Funeral arrangement have been entrusted to the care of the Thoma/ Rich, Lemler Funeral Home in Bluffton. Friends can send online condolences to the family at www.thomarich.com.

The family of Janet L. Smith created this Life Tributes page to make it easy to share your memories.