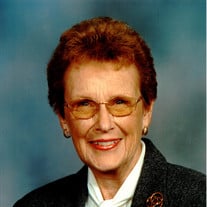 Janet Heller, 85 of Bluffton passed away at 10:50 p.m. on Thursday, March 31, 2016, at Bluffton Regional Medical Center. Janet was born on September 29, 1930 in Wells County to John H. “Jack” Lamson & Norma (Kain) Lamson-Larmore. She graduated from Bluffton High School in 1948 and lived in Wells County until 1988, when she retired from the Wells/Adams Credit Bureau. She then moved to North Carolina and worked at Haywood Community College for 11 years. She returned to Bluffton in 2003, where she was a 30 year active member of Psi Iota Xi sorority serving two terms as President. She was a lifelong learner who loved music, reading and enjoyed nature. Janet attended the First Church of Christ in Bluffton. Janet’s first marriage was to William “Bill” Wolfcale, Jr. and he preceded her in death. She later married Donald W. Heller, who also preceded her in death. Survivors include her children: Linda (John) Deming of Fort Wayne, Beverly (Dwight) Habegger of Berne, Craig (Tami) Wolfcale of Bluffton and step-children: Donald W. (Gale) Heller, Jr. of Markle, Jeffrey A. (Mary) Heller of Michigan and Mark D. Heller of Markle. She is also survived by 12 grandchildren; Kristina (Rob) McComb, Paul (Tammy Swihart) Deming, Scott (Jen) Deming, Lyndsi (Tyler) Moser, Michael (Trista) Wolfcale, Brad (Melissa) Agee, Anne (Bentley) Boots, Heather Agee, Katelyn Wolfcale, Shad Williams, Shawn (Annie) Williams and Stephanie (Rick) Frye along with 19 great-grandchildren and a step-sister, Helen Fitzwater of Edmond, OK. She is preceded in death by her parents and step-father Charles W. Larmore along with her husbands. A service to celebrate Janet’s life will be held at 3:00 p.m. on Saturday (April 30, 2016) at the Thoma/Rich, Lemler Funeral Home in Bluffton. Pastor Larry Sprinkle will officiate. Calling hours will take place from 1 p.m. to 3 p.m., prior to the service on Saturday. A committal service will follow at the Northridge Mausoleum Niche Shelter located at Fairview Cemetery. In Lieu of Flowers, memorials may be made to Operation Smile or to the Wells County Foundation for the Whicker Park ADA Accessible Community Play Ground Fund or Wells County Public Library. Funeral arrangements have been entrusted to the care of the Thoma/Rich, Lemler Funeral Home in Bluffton. Friends can send online condolences to the family at www.thomarich.com.

The family of Janet Heller created this Life Tributes page to make it easy to share your memories.

Send flowers to the Heller family.