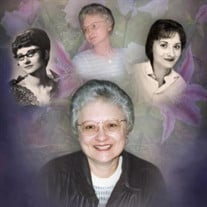 Jane A. Steele, 76 of Bluffton, passed away on Tuesday evening, April 27, 2021, at her residence. She was born on May 17, 1944 in Decatur, Indiana to Myrl Edward & Lillian Edith (Terrell) Harmon. Jane attended school in Bluffton, Liberty Center and Decatur. She worked at General Tire and worked as the secretary in the Bluffton Mayor’s office for Mayor Bill Fryback and Mayor Tuck Faulkner and was known as “Mayor Jane”! On March 20, 1995 in Bluffton, Jane and Bobby J. Steele were married. He preceded her in death on May 10, 2011. Survivors include her children; Darryl Duane Holmes of Texas, Lora LuAnn (Curt) Schorey of Bluffton, Todd (Shelly) Baller of Bluffton, Jeffrey Allan (Patty) Steele of Winona Lake and Dr. A.J. Steele of Elizabethtown, KY. She was a loving grandma to 10 grandchildren, along with 20 great-grandchildren. She is also survived by her siblings; Jack (Sheryl) Harmon of Buckeye, Janet (Terry) Bouse of Nevada, Myrl (Sandy) Harmon of Warren and LaVon (David) Hosler of Huntington. Jane is preceded in death by her parents, husband and a brother, John Harmon. Funeral services will be held at 1:00 P.M. on Tuesday, May 4, 2021, at the Thoma/Rich, Lemler Funeral Home in Bluffton with Dr. Bryson “Gene” Bell officiating. Burial will follow at Elm Grove Cemetery in Bluffton. Friends will be able to live stream the service using Zoom Meeting in the comfort of your home. The Zoom Meeting ID # is 846 8050 8952. You can login to the live stream after 12:45 P.M. on Tuesday. Calling Hours will be held from 4 P.M. - 8 P.M. on Monday, May 3, 2021, at the Thoma/Rich, Lemler Funeral Home. Memorials may be made in Jane’s memory to Visiting Nurse & Hospice. The safety of the family and all visitors is our utmost priority. For everyone’s safety, we ask that you practice social distancing. Masks are at your own discretion. During the current guidelines, we are only allowed a limited number of people in the building at a time. We appreciate your cooperation and patience. Funeral arrangements have been entrusted to the care of the Thoma/Rich, Lemler Funeral Home in Bluffton. Friends can send online condolences to the family at www.thomarich.com.

Jane A. Steele, 76 of Bluffton, passed away on Tuesday evening, April 27, 2021, at her residence. She was born on May 17, 1944 in Decatur, Indiana to Myrl Edward & Lillian Edith (Terrell) Harmon. Jane attended school in Bluffton, Liberty Center... View Obituary & Service Information

The family of Jane A. Steele created this Life Tributes page to make it easy to share your memories.

Jane A. Steele, 76 of Bluffton, passed away on Tuesday evening,...

Send flowers to the Steele family.